The discovery of a molecule in the atmosphere of Venus associated with life could boost the prospects for both government and private missions to the planet.
SpaceNews 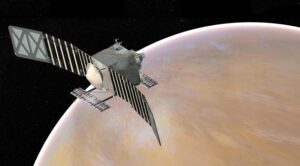 WASHINGTON — The discovery of a molecule in the atmosphere of Venus associated with life could boost the prospects for both government and private missions to the planet.

In a paper published in the journal Nature Astronomy Sept. 14, a group of astronomers reported the discovery of the molecule phosphine in the atmosphere of Venus. The molecule, made of phosphorus and hydrogen atoms, was initially detected with the James Clerk Maxwell Telescope, a telescope that observes in the far infrared and microwave wavelengths in Hawaii, and later confirmed with the Atacama Large Millimeter/submillimeter Array in Chile.

On Earth, phosphine is created by life in anaerobic, or oxygen-free, environments. One possibility for the phosphine found in Venus’s atmosphere is that life in the upper atmosphere may be creating it, but scientists involved with the discovery said there was no definitive proof yet of life there. They added, though, that they had not found an alternative mechanism for creating the phosphine they detected.

“That really left us with two possibilities,” said William Bains of the Massachusetts Institute of Technology, one of the authors of the paper, in a Royal Astronomical Society (RAS) press conference Sept. 14. “The first is that there is some completely unknown, exotic and therefore very exciting chemistry going on in the clouds of Venus that nobody has speculated on before. Or — and this is the more exciting one — the phosphine is being created by life.”

The idea there may be life in the clouds of Venus is not new. While the planet is known for its hot, dense atmosphere that contains sulfuric acid, conditions are more hospitable in the upper atmosphere where temperatures and pressures are lower. Scientists, including the late Carl Sagan, have speculated for decades that life could exist in those upper atmospheric regions, but lacked strong evidence for it.

The phosphine detection could change that. “We are not claiming that we have found life on Venus,” said Sara Seager of MIT, also part of the discovery team. But, she added, “on Earth, phosphine is only associated with life.”

To determine if that phosphine is produced by life, or instead by some other chemical processes, scientists called for more observations, including by spacecraft missions. “We’d like to see really any kind of mission go back to Venus, something that’s capable of measuring gases in the atmosphere,” Seager said. Such missions could also include mass spectrometers to identify more complex molecules linked to life. “We have a long list of things we’d like.”

Two Venus missions were among the five finalists in the previous round of NASA’s Discovery program of lower-cost planetary science missions. However, in early 2017 NASA instead selected two asteroid missions, Lucy and Psyche, and provided additional study funding to a third, the near Earth asteroid telescope mission NEOCam.

In the ongoing competition for Discovery-class missions, two of the four finalists would go to Venus. One, DAVINCI+, would send a probe into the planet’s atmosphere to study its composition. The other, VERITAS, is an orbiter to map the surface using radar. NASA plans to select two missions for development next year.

Other countries are working on, or considering, Venus missions. EnVision is a Venus orbiter mission that is one of three finalists for ESA’s next medium-class mission, launching by the early 2030s, to study the planet’s surface and atmosphere. Russia, a leader in Venus exploration during the Soviet era, is working on a mission concept called Venera-D launching no earlier than 2026 with both an orbiter and a lander. The Indian space agency ISRO is working on a Venus orbiter called Shukrayaan-1 that would launch no earlier than 2023.

At least one privately funded mission is also under study. In recent weeks Peter Beck, chief executive of Rocket Lab, has discussed sending a small spacecraft mission to Venus in 2023. That mission would launch on his company’s Electron rocket and use a version of the Photon satellite bus demonstrated in orbit in a launch last month.

Beck said in a Sept. 3 call with reporters about Photon development that he was motivated to pursue a Venus mission because he thought the planet was overlooked when compared to Mars. “For me, Venus is the more intriguing planet,” he said, both to understand how the planet’s evolution diverged from Earth as well as to look for potential life in the atmosphere.

Doing a Venus mission outside of government agencies, he said, could also shape the future of space exploration more generally. “A private mission to another planet sets a trajectory for where we need to go,” he said. “It’s a real turning point in space if private missions can occur.”

Beck said he was assembling a “pretty amazing” science team, but did not disclose with whom he was working. At the RAS briefing, Seager said she had been in discussions with Beck about a Venus mission. The spacecraft, she said, would weigh only about 15 kilograms, of which 3 kilograms would be available for a science payload. “We have to work hard to make sure an instrument that would be useful for the search for life will fit into that payload,” she said. “We’re really looking forward to it.”

Other private efforts are also emerging. Breakthrough Initiatives, a private foundation funded by billionaire Yuri Milner, announced Sept. 15 it would fund research into potential life on Venus. That effort, according to a statement by the foundation, will include work to “analyze the technical challenges of an exploratory mission in the event that such evidence proves compelling.”

The phosphine discovery could also tip the scales for government missions. The announcement came just as work is starting on a new planetary science decadal survey, with the steering committee for that study announced Sept. 14. That study, which will identify priorities for planetary science missions and related research for the next decade, is scheduled to be completed in early 2022.

While NASA was not involved in the phosphine discovery, the agency’s leader weighed in about it. “The discovery of phosphine, a byproduct of anaerobic biology, is the most significant development yet in building the case for life off Earth,” NASA Administrator Jim Bridenstine tweeted. “It’s time to prioritize Venus.”