QuadSAT raised 2 million euros ($2.35 million) it says will help fuel its pivot from service provider to a seller of drones and software that satellite antenna makers and their customers can use as a cost-effective testing and calibration solution.
SpaceNews 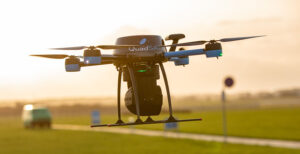 VALLETTA, Malta — QuadSAT, a Danish startup that tests and calibrates antennas using quadcopter drones as stand-ins for satellites, announced Sept. 10 that it raised 2 million euros ($2.35 million) in a Pre-Series A investment round as it prepares to productize its technology.

QuadSAT plans to use the money to fuel its pivot from traveling service provider to a seller of a bundled drone-and-software product that satellite operators, antenna makers and their customers can use themselves for testing, tuning and troubleshooting.

“Our technology right now can be used to hire a QuadSAT technician and we’ll show up and we’ll make the measurements using our drone system,” QuadSAT CEO Joakim Espeland told SpaceNews. “What we want to use this investment for is to take that technology and turn it into a product that we can hand over to customers themselves.”

Espeland said QuadSAT plans to expand its team in preparation for bringing its revised offering to market in March.

The 2-million-euro investment round was led by London-based Seraphim Capital, Denmark’s state-owned Vaekstfonden investment fund, and angel investor Helge Munk, who chairs QuadSAT’s board of directors.

This Pre-Series A round is the first since Seraphim helped the company raise 700,000 euros in seed money at the beginning of 2019.

QuadSAT was founded in Denmark in 2017 and opened an office in 2018 at the UK’s Harwell Space Cluster an hour’s train ride from London after participating in Seraphim Space Camp, a nine-week accelerator program for space technology startups.

“QuadSAT is solving one of the biggest hidden pain-points within the satcoms industry and we expect them to have a major impact on the wider market,” Seraphim Capital managing partner James Bruegger said by email. “We are incredibly excited about what QuadSAT will achieve in the next 12 months.”

For QuadSAT, the value of Seraphim’s continued support goes beyond its financial investment. “They have a huge partner network of corporates that are potential customers for QuadSAT,” Espeland said.

In addition to Seraphim, Vaekstfonden has also remained onboard as an investor. QuadSAT is the investment fund’s first foray into Denmark’s emerging space technology sector.

“QuadSAT has developed a unique product that no one else in the world can offer,” said Simon Frederik Øelund, the Vaekstfonden investment associate responsible for the investment in QuadSAT. “The impact they can have on the industry is unquestionable and this has become more clear since our first investment.”

Currently, the QuadSAT system is capable of testing antennas used to communicate with geostationary satellites in X- and Ku-band. However, the company is currently working toward expanding the system’s capabilities to support Ka-band spacecraft and the growing number of satellites in medium and low Earth orbits. This functionality will be available as a software update that can be purchased by customers, according to QuadSAT.

Have drone, would travel
Despite preparing to offer its specially equipped drones and software bundled as a commercial product in the coming year, QuadSAT continues to provide antenna-testing services to some early customers. The company recently completed work for the European Space Agency supporting the development of advanced satellite communication products and services. Espeland said QuadSAT has some ongoing work with a commercial satellite operator he declined to name.

At the end of 2019, QuadSAT announced that it had demonstrated its antenna-testing service to SES and Eutelsat, two of the world’s biggest commercial comsat operators by revenue.

QuadSAT previously planned to devote 2020 to conducting more such on-site demonstrations but the coronavirus pandemic largely upended those travel-intensive plans.

With COVID-19 making international travel difficult, QuadSAT looked for opportunities closer to home, such as working with Danish radar companies on their calibration needs, and accelerated its timeline for bringing its testing solution to market as a fly-it-yourself product.

“So, I think that when we are talking about March 2021 now, it probably would have been something like August 2021 had it not been for the pandemic,” explained Espeland. “We accelerated the development and looked a little bit into different markets to cope with the challenges of not being able to travel as we wanted.”

With the completion of its Pre-Series A investment round, Espeland said he hopes that a successful product launch combined with strong initial sales will position QuadSAT  “to do a powerful Series A” funding round by this time next year.