China’s leapfrogging advances in space are cause for national security concern, the head of the U.S. Space Force said Dec. 17.
SpaceNews 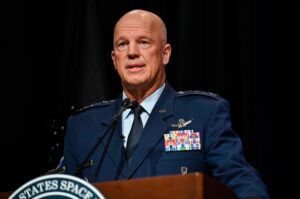 WASHINGTON — China’s leapfrogging advances in space are cause for national security concern, the head of the U.S. Space Force said Dec. 17.

“China has gone from zero to 60 really quick,” Gen. John Raymond, chief of space operations of the U.S. Space Force, said on an online event hosted by TechCrunch.

“A couple of decades ago they were not big players in the space business, and they are definitely today,” said Raymond. “They have a very robust program.”

Raymond said China is developing cutting-edge space systems in an effort to match the space capabilities of the United States. More worrisome for national security, he added, is that China also is pursuing technologies that could be used as weapons against American satellites.

Raymond mentioned low-end reversible jammers, directed energy weapons such as lasers and direct-ascent kinetic missiles as examples of technologies that China could use to disable or destroy U.S. satellites. “That spectrum of threats is something that’s alive and well and concerning,” he said.

The U.S. Space Force is taking steps to innovate faster, Raymond said, echoing comments by Lt. Gen. John Thompson, the commander of the Space Force’s Space and Missile Systems Center, who spoke at the conference on Wednesday. Raymond said Thompson is leading initiatives — such at the Space Enterprise Consortium and the technology accelerator SpaceWERX — to attract startups and give commercial businesses more opportunities to get military contracts.

The plan is to “flatten the bureaucracy, reduce layers of command, get the experts who are operating our capabilities close to a decision maker, or better yet, push the decision making down to their level,” said Raymond. “This will allow us to go at speed.”