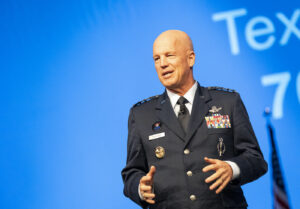 WASHINGTON — The Space Force is moving forward with plans to establish a field command sometime next year to oversee research, development and acquisition of major programs such as satellites, launch services and information systems.

The command will bring together multiple agencies that currently handle space acquisitions. The major component will be the Space and Missile Systems Center in Los Angeles.

Congress said the Defense Department’s Space Development Agency must move under the Space Force by October 2022. The Space Rapid Capabilities Office, a separate organization located at Kirtland Air Force Base, New Mexico, and portions of the Air Force Research Laboratory also are expected to realign under the Space Systems Command

Raymond did not comment specifically on which organizations besides the Space and Missile Systems Center will form the Space Systems Command. But he said it’s important to align agencies that work on space systems. “We will bring unity of effort across the department,” he said. “We will allow disruptive innovators to align with more traditional acquisition organizations.”

In recent months, Raymond said, leaders have been discussing “the working relationships between the different organizations. We’re really happy with how this is going.”

Congress expects the Space Force to unify space organizations, said Raymond. One of the reasons lawmakers supported having a separate military space branch was frustration that more than 60 organizations were involved in space acquisitions, he said. “And there’s more than 30 involved in architectures,” Raymond added. “We stood up a service for a reason. And we see great value in aligning those efforts across the department.”