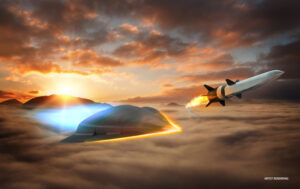 Aerojet Rocketdyne’s engines are used by both Raytheon and Lockheed Martin in tactical and strategic missiles the companies make for the U.S. Defense Department.

“We obviously have some concerns” about Aerojet being acquired by a competitor, Hayes said at the Barclays Industrial Select Conference.

“They are a huge supplier to us,” Hayes said of Aerojet. If Lockheed Martin is allowed to buy the company, “you don’t have an independent supplier on the solid rocket motor side. It gives us pause as we think about the competitive landscape going forward.”

Hayes said Raytheon will make its case to regulatory agencies, including the Federal Trade Commission and the Department of Defense. “We will see how this whole thing plays out,” he said.

Since Lockheed Martin’s Dec. 20 announcement of its intent to acquire Aerojet, analysts have anticipated a challenge from Raytheon on grounds that the acquisition would give Lockheed too much power over military missile programs. The consolidation of Aerojet under Lockheed Martin, for example, would put Raytheon in the position of having to buy about 70 percent of its missiles’ propulsion systems from its primary competitor.

Lockheed Martin’s chief financial officer Ken Possenriede said the company would “play fair” as an engine supplier to defense primes. “Aerojet Rocketdyne is going to be a more reliable supplier as part of Lockheed Martin than it would be as an independent supplier,” he said at the Barclay’s conference a few hours after Hayes’ remarks.

Lockheed Martin’s CEO Jim Taiclet said Dec. 21 he expects the regulatory review of the acquisition to follow the model of Northrop Grumman’s takeover of solid rocket motor supplier Orbital ATK. Regulators approved the deal in 2018 on condition that Northrop agreed to supply motors to its competitors.

Possenriede argued that vertically integrating Lockheed Martin’s missile manufacturing business with the propulsion supplier would improve the engineering process and reduce the fees that are charged to the government when products are bought from subcontractors.

Raytheon is expected to make the case to regulators that Northrop Grumman’s purchase of Orbital ATK should be viewed as a cautionary tale of what happens when competitors are removed from the marketplace.

Orbital ATK was the dominant supplier of solid rocket motors and acquiring the company helped Northrop Grumman gain an overwhelming advantage in the competition for the Air Force’s next-generation intercontinental ballistic missile. Because that advantage was hard to compete against, Boeing bowed out of the missile program and Northrop won by default.

The FTC required Northrop to make Orbital ATK motors available to competitors on a non-discriminatory basis.But Boeing pointed out that such agreements are hard to enforce.

Raytheon also contends that ownership of Aerojet would give Lockheed Martin a huge advantage in future DoD procurements of ballistic and hypersonic missiles.

Aerojet is the sole U.S. supplier of a key technology — the Divert and Attitude Control System — used in interceptor missiles acquired by the Missile Defense Agency to defend the United States against incoming intercontinental ballistic missiles. Both Raytheon and Lockheed Martin use DACS in missiles they make for the MDA.

On hypersonic missiles, whether it’s boost glide vehicles or air breathing missiles powered by ramjet engines, Aerojet would be the primary propulsion supplier.

A big unknown is whether the Biden administration will view industry consolidation with a different lens than its predecessors.

Deputy Defense Secretary Kathleen Hicks would play a central role in reviewing industry mergers. During her confirmation hearing Feb. 2, she said “some consolidation is probably inevitable” because the defense market can only sustain a certain number of suppliers. “But extreme consolidation does create challenges for innovation,” Hicks said. “That’s our comparative advantage over authoritarian states like China and Russia … If we move all competition out, obviously that’s a challenge both for the taxpayer, but it’s also a challenge in terms of the innovation piece.”

The Pentagon in the past has maintained that the defense industry is made up of private companies and it prefers to not interfere with market forces except in cases of mergers between top prime contractors. Aerojet executives have made no secret that they want to be acquired by a large prime contractor like Lockheed Martin to bolster its financial stability. If the FTC sued to oppose the deal, analysts said, Lockheed Martin could walk away but sooner or later somebody would end up buying Aerojet.

Industry consultant Loren Thompson, who works with both Aerojet and Lockheed Martin, said Aerojet is a “fragile enterprise that won’t survive as a stand-alone player in the marketplace.” Aerojet would benefit from being part of a larger conglomerate because currently it is overly dependent on military and civil space programs that “can be derailed by an election outcome,” he said.

Thompson said blocking this merger would raise questions about why the FTC let Northrop Grumman acquire Orbital ATK and now suddenly decided that this transaction raises “too many competitive concerns.”