One of the two co-founders of launch vehicle company Relativity Space is stepping down as the company’s chief technology officer to create a new startup.
SpaceNews 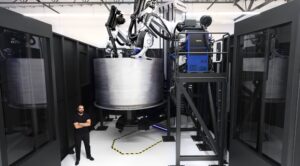 WASHINGTON — One of the two co-founders of launch vehicle company Relativity Space is stepping down as the company’s chief technology officer to create a new startup.

In a series of tweets Sept. 9, Jordan Noone announced he was transitioning from chief technology officer to “executive advisor” at Relativity “in preparation for starting my next venture.” He did not disclose what that new venture was.

Noone and Tim Ellis founded Relativity in 2015 to enter the burgeoning small launch vehicle market. What set the company apart was its embrace of additive manufacturing technologies to produce nearly all the components of the launch vehicle, which the company believes will enable it to produce vehicles more quickly and with less labor than more traditional manufacturing approaches.

@relativityspace has been the dream of a lifetime. Yesterday I began a transition from CTO to Executive Advisor in preparation for starting my next venture. pic.twitter.com/pZFvQi7yTO

The company’s Terran 1 rocket has yet to make its first flight, which is now scheduled for later next year from a launch site it is developing at Cape Canaveral, Florida. The company, though, has grown significantly, opening a new headquarters and production facility in Long Beach, California, earlier this year and reaching an initial agreement with the U.S. Air Force in June to set up a second launch site at Vandenberg Air Force Base in California. It now has nearly 200 employees.

That growth has been fueled by several funding rounds, including a $140 million Series C round Relativity closed nearly a year ago. The company has raised $185 million to date.

In his tweets, Noone cited those funding and technical milestones, as well as achievements in development of the rocket’s Aeon 1 engine and the world’s largest 3-D metal printers, used to produce major components of the rocket.

“It’s with great confidence that I transition the helm to Tim and the entire Relativity team to keep moving our mission forward to launch the world’s first 3D printed rocket into orbit,” Noone wrote. “I’m looking forward to continuing to support Relativity as I move forth onto new adventures.”

Ellis, the other co-founder of Relativity, will continue as chief executive of the company. He told Noone it had been “an absolute honor and privilege” to work with him creating Relativity. “Looking forward to cheering you on with your next adventure,” he wrote.