Relativity Space was selected to launch a small U.S. military payload to orbit in 2023 using a 3D printed rocket.
SpaceNews 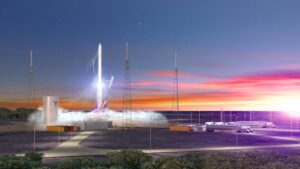 WASHINGTON — Relativity Space was selected to launch a small U.S. military payload to orbit in 2023 using a 3D printed rocket.

The company in a statement March 15 said it received its first Defense Department contract to launch a DoD Space Test Program mission. The award was first announced March 9 by Relativity’s CEO Tim Ellis in an interview with CNBC.

The Defense Innovation Unit — an organization that works with commercial companies and startups — picked Relativity to become a launch services provider for the DoD Space Test Program’s Rapid Agile Launch Initiative. RALI is a program managed by the Space Force’s Space and Missile Systems Center Launch Enterprise to identify viable commercial launch systems with capacity between 450 to 1,200 kilograms to low Earth orbit.

Both Relativity and DIU declined to disclose the value of the contract.

Relativity builds its rockets with 3D printed components at its factory in Long Beach, California. For the DoD mission it will use the Terran 1 small satellite launcher that is expected to fly for the first time later this year from Cape Canaveral, Florida. DoD is the ninth announced launch customer for Terran 1 and the second U.S. government deal following a NASA Venture Class Launch Services contract.

Relativity is the third launch provider selected by DIU for the RALI program since it started in 2017. The other two are Rocket Lab and Virgin Orbit.

Steve Butow, DIU’s space portfolio director, said the military is looking for “low-cost, responsive launch services that not only improve our access to space, but it also enable small satellites to be placed precisely in their mission designed orbits with little if no delay.”