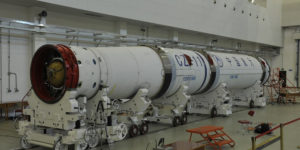 Changguang Satellite Co. Ltd., a commercial offshoot of the state-owned Changchun Institute of Optics, Fine Mechanics and Physics under the Chinese Academy of Sciences, announced (Chinese) the 2.46 billion yuan “pre-IPO” round Nov. 28.

The sum surpasses that of declared funding rounds by any other Chinese commercial space companies, including large rounds secured by launch service providers Expace, Landspace ($175 million) and iSpace ($173 million), as well as Qianxun Spatial Intelligence Inc.

CGST, known as Charming Globe in English, has so far had 28 satellites launched successfully. It also has plans for synthetic aperture radar and hyperspectral satellites.

In September 2018 a Jilin-1 satellite returned video footage of the launch of a OneSpace OS-X1 solid suborbital rocket. Another Jilin-1 satellite, sponsored by Bilibili, a Chinese video sharing website, was lost on the inaugural Kuazhou-11 flight in July.

The funding caps a year of major investment which has also seen a range of cooperation agreements between space companies and local governments, promising an expansion of space activities.

The Chinese government opened portions of the space sector to private capital in 2014. A national strategy of military-civilian fusion has facilitated technology transfer in order to foster innovation, lower costs and create new supply chains, to benefit both civilian and military capacities. These policies are apparently bearing fruit.

2020 has seen a flurry of investment in the Chinese space industry and a number of deals between local government and space companies.

Chinese launch firms Landspace, iSpace, Galactic Energy—which in November reached orbit—and OneSpace have all secured funding this year. A government “new infrastructure” policy announced in the spring promoted and boosted the development of “satellite internet”. A number of

In June Beijing announced a policy to accelerate the development of satellite internet, supporting satellite companies in the north of the city and rocket firms in the south.

A number of local governments and provinces have been forging agreements with commercial space companies. Landspace has located its test facilities in Huzhou, east China, OneSpace gained support for activities in Chongqing, while Galactic Energy recently struck a deal with the southwestern Chinese city of Jianyang, under the administration of Chengdu, for the construction of a rocket research, testing and manufacturing facility.

CAS Space, another spinoff from the state’s Chinese Academy of Sciences, is developing a rocket production facility in Nansha District in Guangzhou, the capital of southern Guangdong province. CAS Space is developing what would be China’s largest solid rocket in terms of payload capacity and aims for a first launch in 2021.

The so-called “national team”, referring to the traditional state space sector, is also expanding its activities.

Jiuquan Satellite Launch Center, located near the Gobi Desert and China’s first launch site, is also understood to be developing a launch complex to facilitate launches of liquid methane-liquid oxygen rockets being developed by Landspace and iSpace. The former plans its first launch of the methalox Zhuque-2 next year while the latter is planning first stage hop tests for a reusable launcher in 2021.