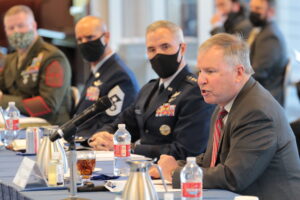 WASHINGTON — The U.S. Space Force and the space industry have a growing need for expertise in the science and technology fields and should develop a plan to fill that demand, said Rep. Doug Lamborn (R-Colo.).

Different organizations in the U.S. military, the private sector and academia are investing in STEM education programs in response to a projected demand for space jobs. But these efforts have been ad hoc and should be better coordinated, Lamborn told SpaceNews Nov. 13.

Lamborn was reelected Nov. 3 to a seventh term in office. His district is home to the U.S. Air Force Academy, U.S. Space Command and several Air Force and Army installations in Colorado Springs. He said he wants his home state to lead the way in the development of the future space workforce.

“We talked about ways we can work together and enhance the development of a space workforce,” he said. “Each group is going things. But it’s not really coordinated, things are not being done with full knowledge of what other folks are doing.”

Because of Colorado’s large aerospace economy and military presence, said Lamborn, he believes the state should be a “center of excellence” for space workforce development.

On Thursday officials discussed, for example, how companies might create educational programs to attract space talent.

Lamborn said the ability to get security clearances faster so people can work on military space programs is one area the Defense Department can help with. “Even allowing college students to have clearances so the can go right into internships while they’re still in school,” he said. “The military should be making room for these interns.”

Working with the next administration

Lamborn, the fourth-ranking Republican on the House Armed Services Committee, also is a co-chair of the Space Force Caucus and is said to be in line for a key subcommittee post.

“It’ll be hard for the Biden people to match the enthusiasm of the Trump administration,” Lamborn said. “However I will be working with them and collaborating and hoping that we still have that continued enthusiasm.”

“There is bipartisan consensus that space is of critical importance, and that there shouldn’t be any retreat backwards in terms of the progress we made on creating a Space Force,” Lamborn added.

One of Lamborn’s goals is to ensure U.S. Space Command’s headquarters stays in Colorado Springs. An Air Force-led basing study is looking at multiple locations around the country. Lamborn said he does not know when the results will be announced. “It’s coming up soon,” he said.

With regard to a legislative proposal passed by the House that would require the Space Force to use Navy ranks and insignia, Lamborn said he will be “happy to go along with whatever the House and Congress decides.”

Issues like ranks, names and logos are “organizational things that are interesting,“ said Lamborn. But he’s more concerned about the Space Force having the “resources and authorities to continue pushing ahead.”