A new report used the growth of China’s space program to argue for continued support of NASA’s own exploration ambitions as well as legislation to assist the space industry and space traffic management.
SpaceNews 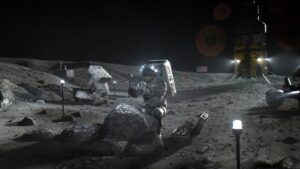 WASHINGTON — A new report used the growth of China’s space program to argue for continued support of NASA’s own exploration ambitions as well as legislation to assist the space industry and space traffic management.

The China Task Force Report, prepared by a group of Republican House members and released Sept. 30, covers a wide range of issues that group linked to the Chinese Communist Party (CCP) and saw as threats to the United States. Much of the report was devoted to issues of national security and the economy.

However, two pages of the 130-page report discussed space exploration. In it, the task force noted Chinese development of a space station and long-term, although as yet unscheduled, plans human lunar mission. “The U.S. should be concerned about the technological innovations and leadership role for the CCP that could come from missions crewed by [People’s Republic of China]-nationals to the Moon,” it stated,

The recommendations in that section of the report, though, addressed NASA’s space exploration programs. “As the CCP seeks to attract international partners to support its own space exploration goals and expand its influence, the U.S. must maintain its presence in low-Earth orbit, return U.S. astronauts to the Moon, chart a future path for human exploration of Mars, and maintain a steady commitment to space science missions,” it stated.

Those recommendations largely endorsed NASA’s current plans for returning humans to the moon by 2024. The report called for passage of a NASA authorization bill, such as the one introduced in the House in January, and funding that “fully supports” its exploration programs. It recommended maintaining the International Space Station and transitioning to commercial facilities, a balanced portfolio of science missions and use of public private partnerships in its programs. It also endorsed the Artemis Accords, the NASA initiative to have partners in its Artemis exploration program endorse a set of norms of behavior in outer space activities.

Outside of space exploration, the report made recommendations in commercial space policy, such as passage of the American Space Commerce Free Enterprise Act bill to reform some commercial space regulations, in order to “provide a stable and attractive environment for private investment and operations” of American space companies. It also supported legislation regarding space traffic management.

While the report describes a competition between the United States and China in space, it does not rule out cooperation in some areas. It called for the two countries, and others, to discuss “shared goals of space sustainability and safety issues” either in bilateral or multilateral talks.

Bilateral cooperation between NASA and Chinese organizations is currently restricted by the so-called “Wolf amendment,” a provision placed in appropriations bills for nearly a decade that requires NASA to seek congressional approval for any collaboration with Chinese entities. “Congress should evaluate, through considered analysis and debate, whether this limitation should be modified or strengthened,” the report stated.

While House Republicans unveiled the report, NASA Administrator Jim Bridenstine was on the other side of Capitol Hill, testifying about the agency’s programs at a Senate Commerce Committee hearing. “Great power competition in space is a reality,” said Sen. Roger Wicker (R-Miss.), chairman of the committee, in his opening remarks. “China’s space ambitions are well known, and the Chinese Communist Party has devoted enormous resources to military and civil space programs.”

During the hearing, Bridenstine emphasized the importance of commercialization of low Earth orbit as key to maintaining a U.S. presence there once the ISS is retired. “China is building their own, what they call, Chinese International Space Station. They’re working very hard to attract our international partners,” he said. “We’re working to prevent that from happening.”

However, in that hearing he resisted having NASA play a bigger role in combating threats from China. Sen. Cory Gardner (R-Colo.) asked Bridenstine questions about Chinese threats to American space companies. “We know that Chinese actors are stealing intellectual property from American businesses,” he said.

Gardner is a backer of a provision in the Senate’s version of a NASA authorization bill that would require the agency, as part of its contracting process, to “take into account the implications of any benefit received” by a company or organization from the Chinese government or any entity controlled by or affiliated with the Chinese government.

That provision has attracted controversy because it would extend that review to “any other commercial or non-commercial entity related through ownership, control, or other affiliation to such entity.” Some think that could affect SpaceX because, while it does not operate in China, it is run by Elon Musk, who electric vehicle company Tesla does have business interests in China.

Bridenstine, asked by Gardner if NASA should take such issues into account into its contracting process, suggested that should be left to other government organizations like the Committee on Foreign Investment in the United States (CFIUS), which reviews foreign investments into American companies.

“We’re not really an investigative agency, so we need to be careful about how we go about doing this,” he concluded.