A report released by NASA Dec. 7 outlined the science that the first crewed Artemis mission to the lunar surface could accomplish, but also some of the conflicts between science goals and the mission’s technical capabilities.
SpaceNews 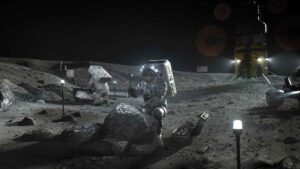 WASHINGTON — A report released by NASA Dec. 7 outlined the science that the first crewed Artemis mission to the lunar surface could accomplish, but also some of the conflicts between science goals and the mission’s technical capabilities.

The 188-page report by the Artemis 3 Science Definition Team, a group of scientists established by NASA in September, lists seven broad science objectives for the mission, encompassing planetary and space science as well as studying exploration-related risks to astronauts.

The team used those science objectives to craft a “candidate science program” for the mission, which will land in the south polar regions of the moon no earlier than 2024, based on the expected capabilities of the lander and related technologies. That science program includes collecting a variety of samples and deploying instruments.

“The report represents a comprehensive science plan for Artemis 3 that requires a balance of investigations that encompass lunar sample return, field science on the surface and deployed instruments on the surface,” said Renee Weber, chief scientist at NASA’s Marshall Space Flight Center and head of the science definition team, during a call with reporters about the report.

The report, though, also illustrated the tensions between the desires of scientists and the potential limitations of the mission. NASA’s Human Landing System (HLS) program set requirements that the lander be able to deliver at least 100 kilograms of equipment, in the form of sample return containers, cameras and other instruments, along with the landers.

That may not be enough to achieve the planned science goals. “Existing mass allocations expected to be available on the HLS system for delivery of tools and payloads to the lunar surface are insufficient to achieve the full spectrum of science objectives outlined by the stakeholder community,” the report stated, recommending NASA support development of instruments that can meet multiple science goals.

Another issue is mobility. NASA doesn’t expect to have a rover available for the Artemis 3 mission, limiting astronauts to the range they can walk from the lander and back. “Mobility on the lunar surface is a key factor for enhancing the scientific investigations outlined
in this report,” the report states, recommending at least an unpressurized rover as soon as Artemis 3.

One solution to the instrumentation and rover issues would be “pre-deployment” of that equipment ahead of the Artemis 3 landing, such as through the use of a commercial lander. The report recommended NASA consider that approach, which could also help characterize the landing site in advance of Artemis 3.

Another constraint is how many samples the mission will be able to return. NASA set a requirement of at least 35 kilograms of samples, with a goal of 100 kilograms. The report described two scenarios for sample collection, one with 25 kilograms and the other with 83 kilograms of varying types.

Weber said the team developed those scenarios to address uncertainty in the capabilities of the three lander concepts under study by Blue Origin, Dynetics and SpaceX. “The team tried to take that into account to specify, at the barest minimum, here’s what we should bring back,” she said.

The report doesn’t identify potential landing sites for Artemis 3, stating that such work “is outside of the scope of the activities” of the science definition team. A final selection, it noted, depends on factors like the capabilities of the HLS system and the date of the mission that are currently unknown.

“We are working on that selection process,” said Ken Bowersox, deputy associate administrator for NASA’s Human Exploration and Operations Mission Directorate. “We’re thinking about trying something a little bit different this time.” He declined to elaborate on the differences envisioned for the landing site selection process.

NASA had targeted launching Artemis 3 by the end of 2024 in order to meet the deadline set by the White House in early 2019. That date now appears in doubt because of an anticipated shortfall in funding for the HLS program for fiscal year 2021, as Congress sis expected to provide no more than $1 billion of the requested $3.2 billion for HLS. The incoming Biden administration may also seek to slow down the Artemis program.

Bowersox did not weigh in on the schedule, arguing it was more important to show “continuous progress” on the overall program. “We’ve got money in the budget. It may not be as much as we asked for, but we’ve got money in proposed budgets and that’s going to help us make progress, step by step,” he said.