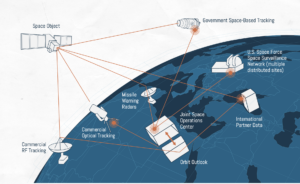 WASHINGTON — Nations around the world — notably China and Russia — are building arsenals of weapons that can destroy or disrupt satellites in orbit. Not much can be done to slow that trend down, but these threats can be countered with technologies and tactics, says a report by the Center for Strategic and International Studies released Feb. 26.

“If space is to remain a source of economic and strategic advantage, the United States must prioritize and expedite its efforts to improve space defenses,” states the report titled Defense Against the Dark Arts in Space: Protecting Space Systems from Counterspace Weapons, written by CSIS analysts Todd Harrison, Kaitlyn Johnson and Makena Young.

The proliferation of missiles, lasers, jammers and other anti-satellite weapons has been widely documented, but little has been said about ways to defend against these threats, said Harrison.

“What we wanted to do with this report is look at the other side of the equation. Yes, we see all these threats to space systems, but what do you do about it?” he said. On the Harry Potter-themed title, he said: “It actually fit perfectly into the Harry Potter theme. If space threats are the dark arts, then what this report talks about is defending against the dark arts.”

Harrison said CSIS embarked on this study because there has not been a lot of public discussion and debate about what it takes to defend satellites. He said it was concerning that the rhetoric from many government officials and think tanks implies that “space is not defendable.” Some have suggested that the military shouldn’t rely on space because satellites are vulnerable. “And that’s not the right answer, that that’s not a plausible answer either,” said Harrison. “We can’t just go without space. What we have to do is work on addressing the vulnerabilities that we face.”

The technologies and tactics the U.S. government uses to defend space mostly are classified, but there was enough public information from the commercial space sector and from foreign governments to put together a 45-page report, Johnson noted. The report details, for example, various types of defensive systems that can be deployed on satellites and ways to design constellations to make them more resilient against disruptions.

Some takeaways from the report: