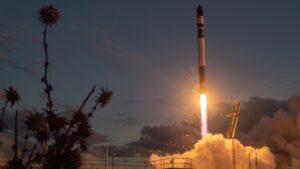 The Electron lifted off from the company’s Launch Complex 1 at Mahia Peninsula, New Zealand, at 2:26 a.m. Eastern after a brief delay because of gusty winds. Rocket Lab scrubbed the original launch attempt for the “Another One Leaves the Crust” mission four days earlier because of “strange data” from a sensor.

The payload for this mission has been shrouded in secrecy since Rocket Lab announced the planned launch Jan. 5. The name of the satellite itself was not disclosed by OHB until after liftoff, and a press kit for the mission did not include the satellite’s mass or orbital altitude, stating only that it was going into an orbit at an inclination of 90 degrees.

Rocket Lab said in its announcement of the upcoming launch that the payloads “will be a single communication microsatellite that will enable specific frequencies to support future services from orbit.” OHB, which built the satellite, procured the launch last August. At the time it cited “an unmatched delivery time” by Rocket Lab, who agreed to launch the payload within six months.

An image of the rocket’s payload fairing included a logo with an illustration of the satellite and the words “BIU GMS-T.” Analysts speculated that the name of the satellite was GMS-T, with BIU referring to “bring into use,” a term in satellite communications for first use of spectrum allocated by the International Telecommunication Union and national regulators and consistent with the stated mission to “enable specific frequencies” for future applications.

I think i have ID-ed the mystery OHB payload! Seems to be a GMS Zhaopin aka Kleo Connect prototype for LEO broadband. Probably secret due to Germany-China relations (see Mynaric for example) https://t.co/ifaeRWPxSs

The ultimate customer for the satellite may be GMS Zhaopin, a Chinese company planning a satellite constellation. It has been linked to a German company, KLEO Connect, that has announced plans for a constellation to provide internet of things services.

The launch is the first of what Rocket Lab previously called a “packed launch manifest” for 2021, although the company has not announced a specific number of launches it foresees performing this year. Those launches will include the first launches from Launch Complex 2 at Wallops Island, Virginia, and from a second pad at Launch Complex 1 in New Zealand.