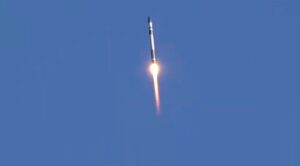 The Electron lifted off from the company’s Launch Complex 1 in New Zealand at 11:05 p.m. Eastern. It deployed its payload, the Sequoia radar imaging satellite for Capella Space, about an hour after liftoff into a 500-kilometer orbit at a 45-degree inclination.

The launch, called “I Can’t Believe It’s Not Optical” by the company, was the first for the small launch vehicle since a failed mission July 4. On that earlier launch, the rocket’s upper-stage engine shut down nearly six minutes after liftoff, preventing its payload from reaching orbit.

A subsequent investigation concluded that an “anomalous electrical connection” in the upper stage caused a loss of power in many systems, including the electric turbopumps that power the engine. The problem with the connection was not seen in earlier flights and also was not detected during acceptance testing on the ground.

“I liken it to stacking up 20 slices of Swiss cheese and having all the holes line up perfectly,” Peter Beck, chief executive of Rocket Lab, said of the failure in a pre-launch interview.

Rocket Lab changed its testing procedures to be able to catch the problem before the launch. The company also used the investigation to revise other vehicle development processes. “We made quite a few changes to system processes and quality checks,” he said. “There’s no hardware changes, but certainly we’ve added some quality improvements. The vehicle coming up the line now will be even more reliable than vehicles prior to it.”

With the return to flight of Electron successfully completed, the company’s next major milestone is to perform its first launch from Launch Complex 2 in Virginia. Rocket Lab previously estimated that the launch would take place about a month after the return-to-flight mission.

Beck said in the interview that the schedule is pending approval by NASA, which operates the Wallops Flight Facility where the new launch site is located, of the vehicle’s autonomous flight termination system. “There’s a very long certification process that, quite frankly, we probably underestimated how long it would take,” he said.

Everything needed for the launch from Virginia, including the vehicle and payload, are ready, he said. “It’s difficult to predict when the certification will be complete,” he said. “We’re 100% ready to fly other than the paperwork.”

The payload on this launch, Sequoia, is the first operational satellite for Capella Space, a startup developing a constellation of synthetic aperture radar (SAR) satellites to provide high-resolution imagery. The “100-kilogram-class” satellite, which follows a demonstration satellite called Denali launched in late 2018, is designed to produce SAR imagery with a resolution as sharp as 0.5 meters.

Capella Space previously planned to launch Sequoia as a secondary payload on the Falcon 9 launch of Argentina’s SAOCOM 1B, a larger radar imaging satellite, in March. However, the coronavirus pandemic and the disruptions it caused for international travel forced a delay in the SAOCOM 1B launch.

Capella, which purchased an Electron launch earlier in the year for a future satellite, elected to use that contract for the launch of Sequoia because of the uncertainty of when SAOCOM 1B would launch. By chance, SAOCOM 1B launched on a Falcon 9 from Cape Canaveral, Florida, less than four hours before the Electron launch.