Rocket Lab will try to recover the first stage of its Electron rocket on its next launch as the company continues its efforts to reuse that stage.
SpaceNews 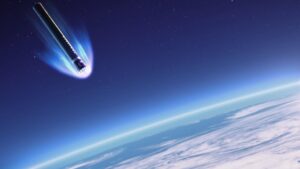 WASHINGTON — Rocket Lab will try to recover the first stage of its Electron rocket on its next launch as the company continues its efforts to reuse that stage.

The company announced Nov. 5 that its next Electron launch, scheduled for Nov. 15 (U.S. time) from New Zealand, will include the first attempt by the company to recover the rocket’s first stage. After stage separation, the first stage will reorient itself for reentry, then deploy a drogue parachute and a larger main parachute before splashing down in the Pacific Ocean about 400 kilometers from the launch site.

Rocket Lab has tested elements of its recovery system before, including two launches where the first stage survived reentry all the way to the surface. The company has separately tested the parachute system. This launch, though, will be the first time the parachutes are deployed.

“This is an all-up combined test, a conclusion of a number of tests that we’ve been doing,” Peter Beck, chief executive of Rocket Lab, said in a call with reporters. “We’ll look forward to seeing really what we’ve got.”

While the company has tested individual parts of the recovery process, Beck said this will be the first chance to see how it is all integrated. “There’s still a lot of unknowns here,” he said. “This is a test where all of the elements come together and, of course, they all have to work together as well. The parachutes are no good if the stage is coming in backwards.”

Asked what made him the most nervous about this test, he responded, “All of it.” While individual parts of this have been tested, putting it all together creates uncertainties. “I’ll stop being nervous once we get it back in the factory.”

If all goes as planned, the stage will splash down at a speed of about 10 meters per second. Two boats will be in the recovery zone to retrieve the stage for later analysis. Weather conditions at the recovery area will be an additional issue for launch, but Beck minimized those concerns. “It’s going to have to be pretty sloppy weather downrange before we won’t go,” he said.

Being able to recover the stage is a major step for Rocket Lab’s reuse plans, but not the final one. Once recovered, Beck said engineers will closely study it to determine what needs to be refurbished or replaced to put the stage back into condition for a launch. “We don’t know the condition of the stage structurally as it reenters the Earth’s atmosphere,” he said. “It may be compromised, for all we know.”

Rocket Lab announced its intent to recover and reuse first stages in August 2019. Beck said he was driven to pursue reusability, which he originally dismissed as infeasible for a small launch vehicle like Electron, to help the company increase its launch rate without having to also scale up its manufacturing facilities.

That remains the key driver for Electron reuse. “Even if we get to use the stage just another single time, it has the effect of effectively doubling production,” he said. “Even one reuse is a really huge advantage.”

The upcoming launch won’t test one other aspect of Rocket Lab’s reusability plans: catching the descending stage in midair using a helicopter. While the company has tested helicopter recovery in drop tests earlier this year, Beck said they want to first know the condition of the stage, as well as ensure they can “passivate,” or remove any remaining energy sources, from it before attempting a helicopter test.

“We’re going to do a few of these splashdowns first,” he said. “If we’ve got a stage in just awesome condition, and everything functioned as we expected and everything was really safe, then we’ll move really quickly to try and snatch one with a helicopter.”

The recovery attempt is a secondary objective of the launch, dubbed “Return to Sender” by Rocket Lab. The primary mission is to place 30 payloads into a 500-kilometer sun-synchronous orbit, 24 of which are Spacebee satellites for Swarm Technologies. Others include payloads for Unseenlabs, a French company developing a constellation of satellites for radio-frequency tracking; DRAGRACER, a satellite that will test the use of a tether for deorbiting; and a satellite built by New Zealand students to study the upper atmosphere.

The Electron’s kick stage will also carry a mass simulator in the form of a 3D-printed gnome funded by Gabe Newell, founder of Valve Software, whose “Half-Life” series of games included a character called “Gnome Chompski.” The mass simulator is also designed to test the use of a metal 3D-printing technology that could be used for future satellites.