Rep. Mike Rogers (R-Ala.) said the Space Force has to invest in systems that are “resilient, flexible and interoperable.”
SpaceNews 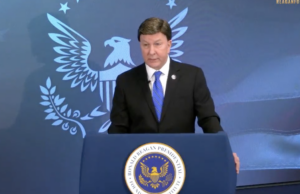 WASHINGTON – Rep. Mike Rogers (R-Ala.), the top Republican on the House Armed Services Committee, said March 18 that he will challenge any proposed cuts to the Defense Department’s budget and called on the U.S. Space Force to invest in advanced technologies to compete with China.

“My biggest concern right now is where President Biden decides to come down on defense spending,” Rogers said in remarks during an event hosted by the Ronald Reagan Institute.

Rogers referenced a letter sent earlier this week by a group of Democrats asking Biden to reduce military spending. “As we all know, he is being pressured from his left to reduce defense spending,” he said.

Most of the members of the House Armed Services Committee will not support cuts to defense, said Rogers. “I’m certain that a National Defense Authorization Act or defense appropriations with cuts will not pass the House. House Republicans just won’t go along with that. And I don’t believe a majority of Democrats will either.”

Rogers said space is one area where DoD has to increase investments. “We all know that the Chinese and Russians are actively competing with us in space. We cannot lose that domain to either of them. Once I understood that, that is when I pushed for the Space Force.”

The Space Force needs “resources and authorities” to modernize and invest in next-generation technologies, said Rogers. Some of those authorities have to be provided by Congress to allow the Space Force to accelerate acquisitions.

“We need to change how we think about space architectures,” Rogers said. “We must start driving towards systems that are resilient, flexible and interoperable.  If we can harness the innovation of the commercial sector, we can make sure we outpace our competitors.”

Rogers said the American public would not want U.S. access to space to be challenged. “Space is something that affects every American whether they know it or not. And our military can’t do its job if the Russians or Chinese are able to interfere with our communications and reconnaissance abilities from space.”