Google announced a three-year agreement Dec. 7 with the Vera C. Rubin Observatory (formerly known as the Large Synoptic Survey Telescope) under construction in Chile to host data on the Google Cloud Platform.
SpaceNews 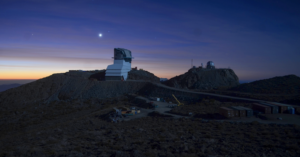 As the Rubin Observatory operations team and the scientific community prepare to work with the enormous dataset expected to be provided by the primary instrument, a telescope with an 8.4 meter primary mirror, the Rubin Observatory signed an agreement to establish an interim data facility, called the Rubin Science Platform, in the Google Cloud.

“We will use that interim data facility to train ourselves on how to run our data system for the real survey when it starts in about three years,” Bob Blum, acting Rubin Observatory operations director, told SpaceNews. “We’ll train the nighttime astronomy community to use datasets like this in a deployed system in the cloud.”

In the past, astronomers often downloaded observations and stored data locally. As telescopes become more powerful and data volume surge, astronomers are turning increasingly to cloud-based platforms to access data and imagery alongside tools to manipulate them.

“The advancements we are seeing in astronomy require a greater need for compute power that only the cloud can deliver,” said Mike Daniels, Google Cloud global public sector vice president.

Google’s contract with the Rubin Observatory “marks the first time a cloud-based data facility has been used for an astronomy application of this magnitude,” Daniels said. “Astronomers will log into the data center on the Google Cloud Platform and do analysis right there, next to the datasets.”

Under the contract, the Rubin Science Platform will process astronomical data collected by the Rubin Observatory during its commissioning phase and provide the data to hundreds of people in the scientific community.

The Rubin Observatory has not yet decided what type of cloud-based platform it will build or buy to house data once scientific observations begin in about three years, Blum said.

The U.S. National Science Foundation, U.S. Energy Department, private and international organizations are funding construction of the Rubin Observatory to conduct the Legacy Survey of Space and Time LSST), a 10-year observation of the night sky. LSST is expected to offer researchers 500-petabytes of data products and images that may shed light on the universe’s structure, evolution and specific objects.

Google and the Rubin Observatory declined to comment on the value of the three-year contract for cloud services.