The head of Russia’s space agency said that the lunar Gateway, part of NASA’s Artemis lunar exploration program, is too “U.S.-centric” for it to participate in, even though the Gateway leverages the existing International Space Station partnership.
SpaceNews 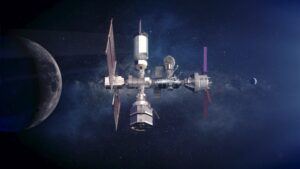 WASHINGTON — The head of Russia’s space agency said that the lunar Gateway, part of NASA’s Artemis lunar exploration program, is too “U.S.-centric” for it to participate in, even though the Gateway leverages the existing International Space Station partnership.

During a panel featuring the heads of seven space agencies at the International Astronautical Congress Oct. 12, Dmitry Rogozin, director general of Roscosmos, said it was unlikely that his agency would play a major role in the Gateway despite the planned participation of other ISS partners, including Canada, Europe and Japan.

“In our view, the lunar Gateway in its current form is too U.S.-centric, so to speak,” Rogozin said through an interpreter. “Russia is likely to refrain from participating in it on a large scale.”

During a later press conference, Rogozin elaborated on his issues with the Gateway. “The most important thing here would be to base this program on the principles of international cooperation which were used in order to fly the ISS program,” he said, such as collective decision-making among the station’s partners.

“If we could get back to considering making these principles as the foundation of the program, then Roscosmos could also consider its participation,” he said of the Gateway.

Rogozin’s comments about seeking to use the ISS as a model for the lunar Gateway are surprising since that is already NASA’s approach for developing it. NASA previously announced it would extend the existing intergovernmental agreement, or IGA, for the space station for the Gateway, even as it seeks a new set of agreements, called the Artemis Accords, for the broader Artemis program.

NASA has been working with each ISS partner on memorandums of understanding (MOU) that would extend that ISS agreement for use on the Gateway. Bridenstine said that, in February, NASA asked Roscosmos for comments on how a potential MOU between the two agencies would work. “We’re still waiting to hear back from them,” he said.

Rogozin said that even if Russia does not decide to participate in the Gateway, he wanted to ensure that it used standard docking interfaces so that Russian spacecraft could dock with it. “We need to have at least two space transportation systems,” he said, referring to Russian plans for a next-generation crewed spacecraft called Orel. Standards for docking would enable Orel to dock with the Gateway “even if we pursue two standalone programs.”

NASA is already pursuing such standards, Bridenstine said. “We are in broad agreement with Roscosmos that we need international standards for interoperability,” he said, including not just docking but other areas, from communications to life support systems. Interoperability, he noted, is one of the principles of the Artemis Accords.

“What the Artemis Accords are really about is coming up with those foundational principles that we all agree on so that when we go explore these worlds together, there’s commonality,” Bridenstine said at the press conference. “The whole purpose of it is to prevent misperceptions.”