Commercial communications satellite operators say their businesses have been doing well this year despite, or even because of, the pandemic, but those companies may face longer-term threats that could lead to consolidation.
SpaceNews 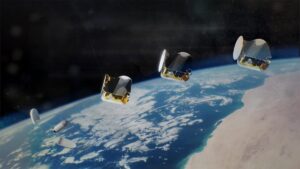 WASHINGTON — Commercial communications satellite operators say their businesses have been doing well this year despite, or even because of, the pandemic, but those companies may face longer-term threats that could lead to consolidation.

In sessions at Euroconsult’s World Satellite Business Week Virtual Edition conference Nov. 9, executives of several major satellite operators said that, other than specific market sectors like aviation and maritime connectivity, they continued to see strong demand for their services.

“Far from being metaphorically huddled under the kitchen table, waiting for the storm to blow over, Inmarsat is very much today on the front foot,” said Rupert Pearce, chief executive of Inmarsat.

Inmarsat completed a buyout by private equity firms last December, going private. That has shielded the company from some of the tumult in the public markets this year. Being private gives the company “somewhat more flexibility moving forward” than competitors that are public traded, he said.

As a private company, Inmarsat no longer discloses financial results, but Pearce said the company was doing well. “Over the last nine months, our business has proved to be highly resilient to the economic impacts of the pandemic,” he said. “We’re well funded, highly profitable and highly cash generative, which meant that the pandemic did not bring about an immediate liquidity crisis for us.”

An exception is the company’s aviation connectivity business line, which has suffered a downturn because of steep drop in commercial aviation. “We cannot earn if aircraft do not fly,” he said. However, that line of business is relatively small, accounting for less than 20% of Inmarsat’s 2019 revenues, and Pearce said other parts of the company were running ahead of their revenue targets for the year.

The pandemic, some executives argued, demonstrated the value of satellite communications. “Looking ahead, I’m very confident not only in the resilience of our industry but also believe that the current situation will reinforce the relevance of satellite as part of the connectivity ecosystem,” said Rodolphe Belmer, chief executive of Eutelsat.

Even Intelsat, which filed for Chapter 11 bankruptcy in May to wipe out much of its debt, was upbeat. “It has not been a typical year. It’s had its challenges, but I’m very optimistic,” said Steve Spengler, Intelsat chief executive.

He said Intelsat was “moving to plan” on its Chapter 11 restructuring, as well as its acquisition of Gogo’s commercial aviation business and contracting for new satellites and ground equipment as part of the C-band spectrum clearing process. “Everything is on track to meet the accelerated clearing milestones,” he said of the C-band process, with the FCC expected to begin its auction of that spectrum Dec. 8.

However, some see threats to satellite operators in the longer term. Clif Marriott, co-head of the technology, media and telecom group at Goldman Sachs, noted the development of satellite constellations by several companies. “I do think that creates a sense of interest and concern by some of the existing operators,” he said.

“There is a prevailing discussion about whether some of the existing incumbent operators should try to consolidate their businesses to get stronger with the advent of new competition potentially coming,” he said. Any sort of merger would be challenging, he acknowledged, but still expected something along those lines to happen “in the medium term.”

While satellite operators showed no interest in any sort of consolidation, they acknowledged the threat posed by low Earth orbit constellations. “I think the LEO market is going to be the biggest issue that we face as an industry here in the near term,” said Rick Baldridge, president and chief executive of Viasat, which has plans for its own LEO system in addition to existing and future GEO satellites.

His concern was that the deployment of LEO constellations might make it difficult for multiple companies to coexist. “It’s one that is at jeopardy of being monopolized if we don’t all thoughtfully pursue the LEO market in a way that allows access for multiple players,” he said.