Companies that operate commercial satellites should participate in the growing conversation about rules of behavior in space, a Eutelsat executive said March 16.
SpaceNews 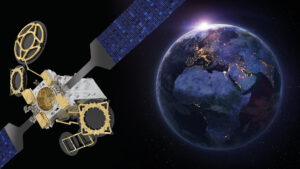 WASHINGTON — Companies that operate commercial satellites should participate in the growing conversation about rules of behavior in space, a Eutelsat executive said March 16.

How to ensure space remains a peaceful environment is a central question that government and military officials from the United States and other countries continue to debate. But this discussion also has to include commercial satellite operators, said David Bertolotti, director for institutional and international affairs at Eutelsat, a Paris-based telecommunications provider.

“We believe we have a major interest in this security related conversation,” Bertolotti said at an online conference hosted by the Secure World Foundation.

Eutelsat operates a fleet of 37 satellites that serve more than a billion users in 150 countries. The industry “has a lot to bring to the conversation on space security,” he said. “To put it bluntly, it is also the key to securing our profits.”

The international community led by space-faring nations like the United States and NATO allies is considering drafting language to supplement the  primary international agreement that addresses space security, the 1967 Outer Space Treaty. The treaty bans the use of nuclear weapons in space and the militarization of celestial bodies such as the moon.

Proponents of a new agreement contend the Outer Space Treaty has been overtaken by the rapid growth in government and commercial space activities, and that new rules are needed to deter hostile behavior like intentional jamming of satellite signals and missile strikes against low-orbiting satellites.

In the 1960s and 70s it was inconceivable that private players would have access to space, said Bertolotti. “And now the perspective is almost the opposite.” How much of a voice companies should have in a space treaty is a question worth considering, he said. “Perhaps we should look at the experience from climate related negotiations where room now is made in the multilateral process for private players.”

Ground assets have to be protected

Norms of behavior have to also apply to the ground-based infrastructure that controls satellites, said Bertolotti. “Please do realize that for a space operator, safety and security of space operations do not just happen in outer space, they actually start on on the ground.”

Anti-satellite missile tests get a lot of attention but operators are less worried about these weapons than they are about electronic disruptions, he said. “Since the very beginning of the telecommunications age, interference has been the nightmare of all operators.”

Although there are international regulations in place to keep operators from interfering with others’ satellites, “hostile interference remains a prime, and pretty cheap way to disable or disrupt satellite operations from Earth,” said Bertolotti.

Another concern are rendezvous technologies that allow satellites to dock with others. “This certainly has very positive applications like cleaning up debris from low Earth orbit,” he said. “But how do you know that one spacecraft that approaches another is doing that peacefully? How can you be sure?”

Bertolotti also suggested rules are needed for the deployment of lasers in space. Operators are putting up optical laser links to transport data from one satellite to another. But lasers also can be weaponized, he noted. “Therefore it is important that it doesn’t become a new source of interference or disruption of activities.”