Earth observation company Satellogic is looking to expand its presence in the United States and compete in the government market.
SpaceNews 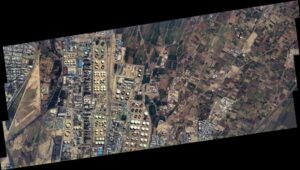 WASHINGTON — Earth observation company Satellogic is expanding its presence in the United States to compete in the government market. It is standing up a U.S. subsidiary specifically to work with national security agencies, Matthew Tirman, head of Satellogic North America, told SpaceNews.

Satellogic, founded in 2010 and headquartered in Buenos Aires, operates in the United States and other countries around the world. The company has a growing commercial business “but let’s be honest, the biggest market right now is defense and intelligence,” said Tirman, who recently joined Satellogic and previously led the government business at Descartes Labs, a geospatial data analytics firm.

Satellogic is positioning to compete in the high-resolution satellite imagery market dominated by Maxar, Airbus, Planet and BlackSky. It also provides hyperspectral imagery and full-motion video from space.

It has 13 satellites in operation that provide 64-centimeter resolution imagery and will launch four more this summer on SpaceX’s Transporter-2 rideshare. Tirman said Satellogic has signed a long-term launch agreement with SpaceX.

Satellogic manufactures its own satellites and has a goal to build a constellation of 300 spacecraft by 2025, said Tirman, “so we can remap the world every week.” To get there, however, the company will need to raise more money from investors and increase its sales.

The hyperspectral capability is in final stages of development and will be launched later this year, he said. Hyperspectral data is in high demand in the agriculture sector but is used increasingly by defense and intelligence agencies to analyze trends such as macroeconomic changes over certain parts of the world.

Satellogic also provides 60-second full motion video of any area of the world. Some customers, for example, want to track  debris on the ocean, said Tirman.

The largest government buyer of satellite imagery is the National Reconnaissance Office. Satellogic wants to start conversations with the NRO and with NASA, which uses Earth observation data to track climate change.

With 13 operational satellites, “we’re trying to figure out how to monetize and operationalize all of this data,” said Tirman. Satellogic has its own data scientists but also plans to partner with analytics companies like Orbital insights and Descartes Labs.

Later this year Satellogic will start offering a platform for subscribers who want to task satellites themselves to shoot imagery. Another service will be hosted payloads, said Tirman. Companies will be able to place sensors like IoT or AIS on Satellogic’s buses.

Tirman said Satellogic has spent 10 years doing research and development, and creating a small satellite from the ground up, “and now it’s time to bring the products to market.”

Satellogic announced March 11 it joined the U.S. Geospatial Intelligence Foundation and the Intelligence and National Security Alliance, two industry groups that promote the application of geospatial intelligence to national security challenges. It also joined the SmallSat Alliance which works with Congress and government agencies, and the Open Geospatial Consortium that sets geospatial standards to ensure interoperability of geospatial data.