China added to its Earth observation capabilities with the clandestine launch of two satellites from Taiyuan late Saturday.
SpaceNews 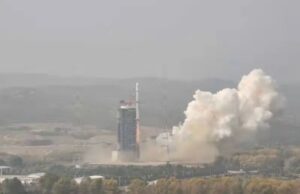 HELSINKI — China added to its Earth observation capabilities with the clandestine launch of two satellites from Taiyuan late Saturday.

The unexpected launch of a Long March 4B rocket carrying satellites HJ-2A (Huanjing-2A) and HJ-2B took place at 11:23 p.m. Eastern Saturday. While Chinese launches are rarely publicly announced ahead of time, the publishing of airspace closures usually provides a few days of notice. No notices were apparently issued ahead of the launch.

The first indication of the activity came in the form of a declaration of launch success from China’s state-owned space contractor. The China Aerospace Science and Technology Corp. (CASC) announced mission success (Chinese) within an hour of liftoff.

The satellites were later cataloged in a 600 by 654-kilometer orbits inclined by 98 degrees. The rocket third stage was in a 428 by 656-kilometer orbit.

The new satellites replace HJ-1A and HJ-1B launched in 2008. Chinese media report that the satellites will monitor land and water resources and disasters, and serve the industries of agriculture and forestry.

The Shanghai Academy of Spaceflight Technology (SAST) developed and manufactures by the Long March 4B. China conducted a Long March 4B launch earlier in the week from Jiuquan in the northwest. That rocket also performed a second test of grid fins for constraining the drop zone for the first stage, following up on an initial 2019 test.

Saturday’s secretive Chinese launch adds to a number of recent launches conducted with little or no warning. China tested what it describes as a ‘reusable experimental spacecraft’ earlier this month under tight security and may have landed horizontally after two days in orbit. It also released an unknown, functioning payload into orbit. The object (NORAD ID 46395) is in a 331 by 347-kilometer orbit and still transmitting.

A Long March 11 solid rocket launched from a platform in the Yellow Sea Sept. 14 Eastern after departing from a new coastal spaceport complex for sea-based launches. The launch successfully sent nine Jilin-1 Gaofen remote sensing satellites into orbit, with the flight path going directly over Taiwan. NOTAMs were issued a day ahead of launch.

The launch campaign for the Chang’e-5 lunar sample return mission is quietly underway at the Wenchang Satellite Launch Center following delivery of components of a Long March 5 rocket this week. Activity points to a late November launch ahead of sunrise over the landing site Nov. 27.

The country has carried out 29 launches so far in 2020 suffering four failures. Inaugural launches of the Long March 7A and the Expace Kuaizhou-11 failed, while an issue with the workhorse Long March 3B led to the loss of the Indonesian Palapa-N1 communications satellite. Most recently Sept. 12 saw the loss of a Kuaizhou-1A rocket and a commercial remote sensing satellite.

CASC stated early January that it intended to carry out around 40 launches in 2020. An inaugural launch of an expendable Long March 8 could take place this year. The new launcher is expected to be upgraded so as to be able to recover the first stage and side boosters.