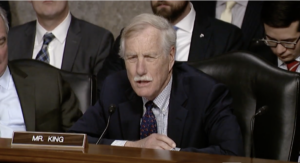 King is an independent but he caucuses with Democrats. Senate leaders on Tuesday revealed new committee assignments based on a deal reached earlier this month by Senate Majority Leader Chuck Schumer and Senate Minority Leader Mitch McConnell on a power-sharing agreement for an evenly split 50-50 Senate. Democrats hold the majority with Vice President Kamala Harris holding the tie-breaking vote.

King replaces Sen. Deb Fischer (R-Neb.) who will now be the ranking Republican on the subcommittee. In getting this assignment, King leaped ahead of Sen. Martin Heinrich (D-N.M.) who was the top Democrat on the strategic forces panel in the last Congress.

As a longtime member of the Senate Armed Services Committee and the Senate Select Committee on Intelligence, King has had a strong voice on national security and foreign policy issues.

Watchers of the political back-and-forth over the Space Force as Congress considered the Trump administration’s proposal will remember King as one of the skeptics. During an April 2019 hearing with DoD and Air Force officials, King said he was not convinced a Space Force was needed because the Air Force was “doing a good job.” The United States is “dominant in space right now,” King said. “I don’t understand how adding a box to an organizational chart is going to give us some kind of qualitative military edge.”