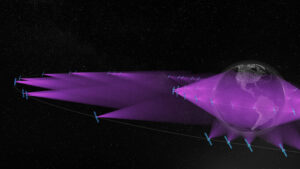 The O3b mPower constellation is designed as a multi-terabit global network capable of aiming gigabits of Ka-band capacity at customers in aviation, government, energy and other sectors. The constellation builds off of SES’s current O3b fleet of 20 satellites built by Thales Alenia Space.

SES operates around 70 satellites, comprising roughly 50 in the geostationary arc for television and broadband, and 20 in medium Earth orbit for low-latency internet services.