SES announced Nov. 30 it was selected by the U.S. Air Force to compete for contracts to be awarded under the Advanced Battle Management System (ABMS) program.
SpaceNews 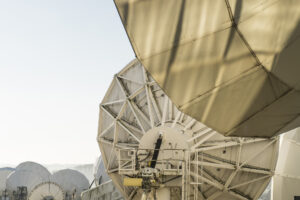 WASHINGTON — Satellite communications provider SES Government Solutions announced Nov. 30 it was selected by the U.S. Air Force to join the pool of vendors that will compete for contracts to build the military internet of things.

SES will compete to provide communications services for the Advanced Battle Management System program, or ABMS — an Air Force project that seeks to connect weapon systems and command centers so they can share data. ABMS is one piece of a larger Pentagon effort to build a military internet of things known as Combined Joint All Domain Command and Control.

The Air Force requested $302 million for ABMS in fiscal year 2021, with projected funding of $3.2 billion over the next five years. A large group of vendors from across the defense, aerospace and tech industries have been selected so far to compete for up to $950 million worth of individual task orders the Air Force plans to award as it continues to test and develop the ABMS.

SpaceX’s Starlink and SES have been tapped to provide satellite-based communications for the ABMS. Starlink’s space internet is in low-Earth orbit, whereas SES has satellites in geosynchronous and medium-Earth orbit.

“The commercial satcom we’ve seen is highly appealing to us,” said Will Roper, assistant secretary of the Air Force for acquisitions.

The idea is to make ABMS an open architecture and to use commercial systems to link, for example, military combat aircraft that currently can’t pass information to other systems. The Air Force wants to be able to move data seamlessly from sensors to weapons systems and to cloud computing environments so information can be analyzed.

Roper told reporters Nov. 24 that the ABMS architecture has been in the works for 18 months and that the Air Force will continue to conduct new demonstrations known as “on-ramps” over the coming years.

He said ABMS will be a top priority for the Air Force, but it’s a challenging program that has many moving parts and is incompatible with the rigid military procurement system. “The internet of things has happened all around us but has not happened for the military,” said Roper. “The acquisition system we’ve inherited does not deal well with cross-cutting capabilities nor with capabilities that continually update.”

Roper directed in a memo Nov. 23 that the Air Force Rapid Capabilities Office will be responsible for integrating and fielding ABMS technologies. The RCO manages some of the Air Force’s most cutting-edge programs such as the X-37B spaceplane and the B-21 stealth bomber.