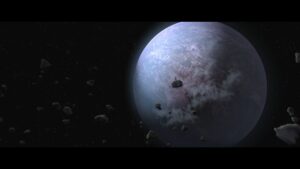 WASHINGTON — Space startup Slingshot Aerospace announced Oct. 8 it has won a U.S. Space Force contract to develop an immersive simulation of the orbital environment. Military students will use the tool to learn the mechanics of space operations.

Slingshot for this project teamed with Hollywood studio The Third Floor, which created the virtual reality graphics for space-themed movies like The Martian and Gravity.

The company received both government and private funding to develop the simulation tool. Slingshot was awarded a $1 million Small Business Innovation Research (SBIR) Phase 2 contract from the Space Force, and got an additional $1 million from its venture investor ATX Venture Partners.

“Space operators need to understand complicated concepts like astrodynamics, the effects of various items in orbit, and how spacecrafts maneuver among other objects in space,” Col. Max Lantz, commandant of the U.S. Air Force’s National Security Space Institute, said in a statement.

The Space Force wants its operators to have access to modern educational tools, he said. Students at the National Security Space Institute and the U.S. Air Force Academy will be among the primary users.

Melanie Stricklan, Slingshot’s co-founder and chief strategy officer, said the company’s “orbital laboratory” will help teach students and seasoned professionals the fundamentals of space domain awareness and complex astrodynamics. “Its purpose is to provide a new, modern, and engaging way to perceive, comprehend and predict object relations in space and orbital scenarios,” she said.

Slingshot will provide the space domain and data expertise and The Third Floor will handle the visualization component.

Stricklan said the final product will be delivered to the Space Force by December 2021. The simulation will be designed with “real-world capabilities that can help Space Force operational centers nationwide with scenario planning,” she said.

Chris Edwards, CEO of The Third Floor, said that while the studio is known for its Hollywood productions, “this seminal U.S. Space Force project gives us an opportunity to make a real-world impact on our country’s national security.”