NASA is planning a hotfire test of the core stage of the Space Launch System in the middle of November, a schedule it says keeps it on track for its first launch late next year.
SpaceNews 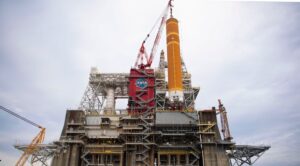 WASHINGTON — NASA is planning a hotfire test of the core stage of the Space Launch System in the middle of November, a schedule it says keeps it on track for its first launch late next year.

During an Oct. 13 media teleconference, officials with NASA, Boeing and Aerojet Rocketdyne said they are making good progress on a series of tests of the core stage at the Stennis Space Center in Mississippi collectively known as the Green Run. Those tests will culminate in a full-during firing of the stage’s four RS-25 engines.

Most recently, technicians completed the sixth of eight planned tests, a practice countdown, on Oct. 5. “We haven’t seen anything we didn’t understand” during those tests, said John Shannon, Boeing vice president and program manager for SLS. “Now we’re ready for the next two steps.”

Once the test is complete, technicians will perform refurbishment of the core stage, then take it off the test stand and ready it for shipment to the Kennedy Space Center. Shannon said the goal is to ship it to KSC by Jan. 14 to begin preparations for the Artemis 1 launch currently scheduled for November 2021.

With the rest of the hardware for Artemis 1, including both the Orion spacecraft and other components of the SLS, already at KSC, the core stage is on the critical path for the mission, acknowledged John Honeycutt, NASA SLS program manager. That means any delays in the completion of the Green Run tests and delivery of the core stage to KSC would affect the overall Artemis 1 schedule.

“It’s been extremely important for us to try and hold the schedule,” he said. The current schedule, he said, has 20 to 25 days of margin to the Jan. 14 ship date for core stage.

Holding schedule has been difficult in recent months for reasons that, this time, have nothing to do with the SLS itself. Stennis shut down for about two and a half months during the pandemic, Shannon said. Shortly after it reopened, as many as 30 employees had to quarantine after being exposed to COVID-19 outside of the center. “Since those early cases, we haven’t had any significant quarantines required, and nobody has come down with COVID-19.”

Another issue has been the active hurricane season in the Gulf of Mexico. Shannon said work paused on five occasions because of approaching storms, typically for several days at a time. The current schedule, he said, is “assuming we don’t have a sixth hurricane that would cause us to shut down.”