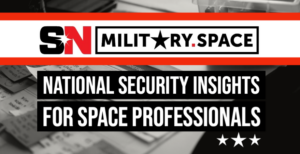 You’re reading SN Military Space, a weekly newsletter for national security space professionals. To get these insights every Tuesday morning, sign up for a free subscription.

FUTURE SPACE OPERATIONS: The old military adage that tactics win battles but logistics wins wars is not forgotten in the Space Force’s new doctrine. “Space mobility and logistics” are key competencies that the service has to work on, according to the Spacepower vision document.  How the Space Force defines its needs for mobility and sustainment will be hugely important to space companies eyeing military contracts in areas like small launch, orbital transport services and satellite servicing.

“During conflict, space launch must be dynamic and responsive, providing the ability to augment or reconstitute capability gaps from multiple locations,” says Spacepower.

SPACE EDUCATION FOR NEW OFFICERS The U.S. Air Force Academy is beefing up the content of its space program to support the needs of the U.S. Space Force. Cadets in the academy’s space program learn how to build and operate satellites. Starting this year they will also take courses in space law, strategy and operations.

DECLASSIFY MILITARY SPACE TECH? NOT SO FAST
Despite calls for a more open discussion on military space programs, leaders of the Air Force and Space Force rapid procurement organizations argue in favor of secrecy.