South Korea will spend 615 billion won ($553.1 million) in 2021 on space activities aimed at bolstering its capacity to produce satellites, rockets and other key equipment. The Ministry of Science and ICT announced the budget on Feb. 8, representing 16 government bodies involved in space development.
SpaceNews 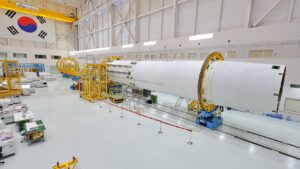 SEOUL, South Korea — South Korea will spend 615 billion won ($553.1 million) in 2021 on space activities aimed at bolstering its capacity to produce satellites, rockets and other key equipment. The Ministry of Science and ICT announced the budget on Feb. 8, representing 16 government bodies involved in space development.

The total amount was a slight decrease from last year’s 615.8 won, marking a contrast to expanded budgets of major economies such as the United States and China amid the reignited space race with the advent of New Space.

“In 2021, we will successfully fulfill high-profile space development projects such as the launch of carrier rocket ‘Nuri’ and a next-generation medium-sized satellite with our own technology,” Jeong Byung-seon, 1st vice minister of the Ministry of Science and ICT, said in a statement.

Nearly half the budget, or 322.6 billion won, will be spent on the development of observation and multipurpose communications satellites and an integrated satellite data management system for public services including weather forecasting and marine and environmental observation.

Specifically, two multipurpose observation satellites are under development to be sent into orbit next year. A system design for two others — an ordinary observation satellite and a microsatellite constellation — is underway. And there are five others that are being developed for the purpose of scientific research.

Nearly 30 percent of the budget, or 189.7 billion won, will go to the launch of the nation’s first domestically developed rocket KSLV-2, nicknamed Nuri. South Korea plans to launch the new 200-ton KSLV-2 with a mock payload in October at Naro Space Center in Goheung, while a second launch, carrying a real satellite, is slated for May 2022 from the same launch site.

While the country sent its 140-ton KSLV-1 rocket into space in 2013 after two failed attempts, the first-stage, main rocket on that launch vehicle was built using Russian technologies. But the KSLV-2 relies entirely on homegrown technologies. Boasting four 75-ton liquid engines in its first-stage booster, the three-stage rocket is meant to carry a 1.5-ton satellite into low Earth orbit. The second stage has a single 75-ton engine and the third stage has a seven-ton engine.

A second round of combustion tests on the KSLV-2’s first stage engines were conducted Feb. 25. The Korea Aerospace Research Institute (KARI)  said the test lasted 101 seconds and revealed no apparent problems with the engines’ durability. The engines passed a 30-second first test in January and will go through the last 130-second test in March. If the final test is successful, South Korea will remain on track for the rocket’s October demonstration launch.

While KSLV-2 development continues, South Korea will launch a mid-sized satellite on Russia’s Soyuz rocket in March from the Baikonur Cosmodrome in Kazakhstan. It will be used to monitor urban areas and topographical features and design maps.

The Korea Pathfinder Lunar Orbiter, set to launch in August 2022 aboard a SpaceX Falcon 9 rocket, will image the moon.

In the longer term, South Korea will come up with a road map to reduce space debris, although specific plans were not stated.

“I expect a big budget increase next year because the government is preparing to launch several big-budget projects including Korea Positioning System that would cost 4 trillion won,” said An Hyoung-joon, a research fellow at Science and Technology Policy Institute, a South Korean state think tank. “More government bodies and private companies are paying attention to space and exploring ways to use it effectively, which I believe will bring more money into space development.”