A Soyuz rocket successfully launched a French reconnaissance satellite Dec. 29 in what is likely the final launch of an active 2020 in spaceflight.
SpaceNews 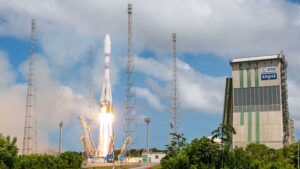 WASHINGTON — A Soyuz rocket successfully launched a French reconnaissance satellite Dec. 29 in what is likely the final launch of an active 2020 in spaceflight.

The Soyuz ST-A rocket lifted off from the Guiana Space Center in French Guiana at 11:42 a.m. Eastern, after a one-day delay because of gusty upper-level winds. The Fregat upper stage, after performing two burns, released the Composante Spatiale Optique (CSO) 2 satellite nearly one hour after liftoff.

CSO-2 was built by Airbus Space and Defence for the French military. The 3,562-kilogram satellite carries an imaging payload provided by Thales Alenia Space to provide high-resolution images at optical and infrared wavelengths, enabling observations during daytime or nighttime.

The spacecraft is the second of three satellites in the overall CSO system, after the launch of CSO-1 in December 2018. CSO-1 operates in an 800-kilometer sun-synchronous orbit to serve what French officials call a “reconnaissance” mission, while CSO-2 will operate in a 480-kilometer orbit, producing higher resolution images for an “identification” mission. A third satellite, CSO-3, is scheduled for launch in 2022 to supplement CSO-1’s reconnaissance mission.

The launch was the third Soyuz mission this month for Arianespace. A Soyuz launched from French Guiana Dec. 1 carrying the FalconEye 2 imaging satellite for the United Arab Emirates, while another Soyuz, launching from Russia’s Vostochny Cosmodrome Dec. 18, placed a set of 36 OneWeb satellites into orbit.

Arianespace conducted 10 launches in 2020 despite a nearly five-month hiatus from March to August because of the pandemic. Besides the three Soyuz launches this month, Arianespace conducted two other Soyuz launches of OneWeb satellites from the Baikonur Cosmodrome, as well as three Ariane 5 and two Vega launches from French Guiana. One of the two Vega launches, carrying two European Earth science satellites, failed in November because of improperly connected cables in the thrust vector control system of the rocket’s upper stage.

The launch is also the last scheduled orbital launch of 2020. There were 114 orbital launch attempts in the year, the same as in 2018 and up from the 102 in 2019. Ten of the 114 failed to reach orbit: four by China, four by U.S.-based companies, and one each by Iran and Europe. The United States accounted for 44 launches, including seven by Rocket Lab, a U.S.-headquartered company that launches from New Zealand. China performed 39 launches. Russian vehicles performed 17 launches, counting the two Soyuz launches from French Guiana.