Space Command is looking to expand its network of data-sharing partners as activities in space grow.
SpaceNews 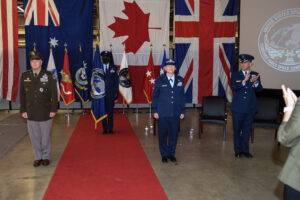 WASHINGTON — To get intelligence about what is happening in orbit, U.S. Space Command works with a close-knit group of allies and private companies.

The command is now looking to expand its network of data-sharing partners as activities in space grow and the Pentagon worries about Chinese weapons targeting U.S. satellites.

“How do we create the space picture? How do we know who’s in the domain and operating there?” asked Maj. Gen. DeAnna Burt, who commands the multinational space operations arm of U.S. Space Command.

In an interview with SpaceNews, Burt said one of the challenges for Space Command is to able to capture a complete view of what is going on in space, which has become a complex enterprise of civilian government, military and private sector activities.

The military has precise intelligence for the air, land and sea domains. “We have to create the same picture for space,” Burt said.

Space Command has signed agreements with 25 nations that share space situational data. That data is used to identify the location of satellites and space junk so collisions can be prevented. A handful of countries have operators deployed at Vandenberg. Representatives from Canada and Australia work full-time at the CSpOC. A Space Command “multinational space collaboration cell” includes France, Germany and the United Kingdom.

Burt said more nations will be added to the coalition but could not confirm which ones.

Gen. John Raymond, former commander of U.S. Space Command, told lawmakers on Capitol Hill a year ago that there were plans underway to add Japan, Italy and South Korea to the multinational space collaboration cell.

Space Command also gets intelligence from a group of commercial satellite operators known as the “commercial integration cell.”

The CIC started as a pilot program in 2015 when space surveillance was handled by U.S. Strategic Command. The idea was to bring in more data from satellite operators to improve the military’s space situational awareness.

Burt said SpaceX is expected to join the CIC in the near future. “There are talks under way,” she said. SpaceX is a launch services provider and now the operator of the world’s largest satellite constellation.

“It’s important for the CSpOC to have connections and dialogue with industry,” said Burt.

Burt said a top priority for the Combined Force Space Component Command is to have better collaboration tools that allow information to be shared across military and civilian networks.

“The space enterprise is a whole of government,” she said. “We need command-and-control capabilities to make sure that across the board we’re able to support both our commercial civil and coalition partners.”

Current space tracking software applications are not compatible, for example, between systems with different classification levels. Burt said that having tools “that allow us to best interact with our partners at every classification level is critical.”

The Space Force’s procurement organization, the Space and Missile Systems Center, stood up a software factory in Los Angeles to develop cloud-based apps to track space objects and share data with allies. The program was named Kobayashi Maru, a training exercise in Star Trek’s Starfleet Academy,

Space Command has already been able to share some of the apps with partners who now use them in their own space operations centers, said Burt.

Space operations are constantly changing, Burt said. “We must frequently evaluate and improve our processes and technology to monitor and react effectively in the space environment, with our ultimate goal being to ensure the safe and responsible use of space.”

Over the coming years Space Command is expected to hand over spaceflight safety traffic management responsibilities to the Department of Commerce. Space Command will then just focus on the national security aspects of space domain awareness such as monitoring potential adversaries’ activities in space.

Burt said the command is working to “enable the Department of Commerce, as we continue to improve these capabilities.”