Aerospace Corp.’s policy center rolled out “Space Agenda 2021” to influence discussions in the next administration.
SpaceNews 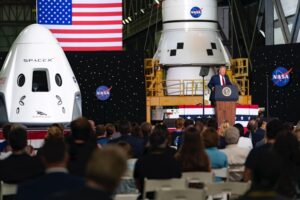 WASHINGTON — The nation’s civilian and military space programs have barely registered in the 2020 presidential race, and not much has been said about space by former Vice President Joe Biden.

James Vedda, senior policy analyst at the Aerospace Corporation’s Center for Space Policy and Strategy, said voters’ apparent lack of interest in space does not mean these issues won’t be important in the next administration.

Speaking Oct. 27 in a virtual briefing, Vedda said Aerospace’s policy center intends to influence future debates on issues such as space traffic management, NASA’s Artemis program, the role of the private sector in space innovation, military space doctrine and the development of solar power in space.

Space solar power is “exotic but also very intriguing and worth looking at closely,” said Vedda.

Aerospace Corp. — a nonprofit research center known for providing technical advice to government agencies — rolled out a website called “Space Agenda 2021” aimed at shaping policy discussions in the next administration and Congress.

“We recognized that it was not enough for Aerospace to advance the mission by whispering in the ears of government officials leading acquisition programs,” said Jamie Morin, executive director of the Center for Space Policy and Strategy. “We had to be serious and focused on shaping the future and talking to a broader audience.”

Space Force in the next administration

Morin noted that Biden’s campaign has not commented on the U.S. Space Force. The establishment of an independent military branch for space was a central initiative of the Trump administration.

Biden has been “very clear on the importance of the space domain and the importance of a strong science and technology base for the United States, calling for increased federal funding for R&D,” said Morin. “I also expect he will be open to engaging on scientific mission areas where DoD and NASA have roles to play.”

The standup of the Space Force is “still a work in progress,” Morin said. And any discussion of how much support the Space Force would get from a new administration and new leadership in Congress would be speculative at this point, he said.

Another consideration in the Space Force debate is the impact of budget cuts if a future Congress decided to shift resources from national security to domestic economic stimulus.

Again, that would be highly speculative, said Russell Rumbaugh, systems director at the Center for Space Policy and Strategy. “It’s not clear that austerity is coming or even that it’s the right answer,” he said.

Even if DoD faced a funding crunch, it is unlikely that the administration would even consider folding the Space Force back into the Air Force, said Rumbaugh. “The Space Force is a new organization but that doesn’t mean it’s first on the chopping block.”