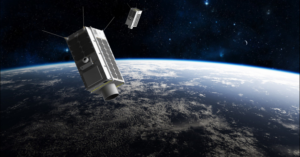 SFL developed GHGSat’s first three satellites around its 15-kilogram microsatellite platform called Next-generation Earth Monitoring and Observation or NEMO. GHGSat’s next three satellites also will be housed in NEMO platforms, according to the news release.

“SFL has proven their technical expertise with our first two satellites,” GHGSat CEO Stephane Germain said in a statement. “We are looking forward to this next phase of our partnership to support the growth of GHGSat’s constellation.

In the two months since GHGSat launched Iris, the satellite has detected and measured point sources of greenhouse gas emissions. GHGSat credits that capability in part to the precise attitude control and target tracking capability of the SFL NEMO bus.

“We fine-tuned the attitude control required for GHGSat-C1 [Iris] by leveraging the results from the GHGSat-D demonstration mission,” SFL Director Robert Zee said in a statement. “We will make continued advancements in the next GHGSat constellation.”

In one recent test, Iris pinpointed five separate methane emissions, two of which were smaller than 220 kilograms per hour, according to the news release.