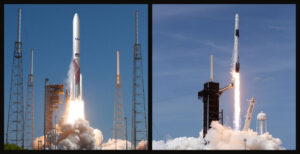 ULA and SpaceX were selected in August as the two launch providers for Phase 2 of the National Security Space Launch program. ULA won 60% and SpaceX 40% of the estimated 30 to 35 launches projected between 2022 and 2027. The contracts are fixed-price and awarded on a yearly basis based on demand. NSSL launches include Defense Department and National Reconnaissance Office missions.

The Space Force in August awarded the first three missions of Phase 2 scheduled to launch in 2022.