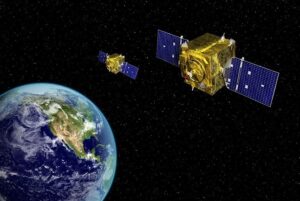 The contract is for professional services for the Peterson-Schriever Garrison, a Space Force unit in Colorado Springs that operates surveillance, communications and navigation satellites.

Peraton’s contract was awarded under a General Services Administration program called One Acquisition Solution for Integrated Services, or OASIS. The company received a $7.8 million five-year contract in September 2015 that was re-competed in September 2020.

The 2015 contract was to support the Air Force’s 50th Space Wing which was inactivated in July and replaced by the Space Force Peterson–Schriever Garrison.

Under the OASIS contract, Peraton specifically will work with the Space Force’s 1st Space Operations Squadron of Space Delta 9, and the 2nd and 4th Space Operations Squadrons of Space Delta 8. Orbital analysis services include safe operations of satellites, collision avoidance and “over-the-shoulder” support during satellite anomalies and daily operations, the company said. For example, experts advice satellite operators on how to conserve fuel in collision avoidance by modifying planned maneuvers, and assists in the disposal of old GPS satellites.