Gen. John Raymond said he expects greater collaboration between the U.S. Space Force, NASA and other agencies, and that cooperation can save U.S. taxpayers money.
SpaceNews 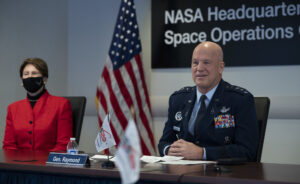 WASHINGTON — Chief of Space Operations Gen. John Raymond said he expects greater collaboration between the U.S. Space Force, NASA and other agencies, and that increased cooperation can save U.S. taxpayers money.

“We have a very close partnership with NASA” and that is likely to continue under the new administration, Raymond said Feb. 2 on a video call with reporters.

Raymond said he disagrees with criticism that Space Force and NASA at times blur the lines between military and civil space.

“I’m not concerned with that at all,” he said. “We are not NASA and they’re not the Space Force. But we operate in the same domain and we think there are things we can do to save taxpayers dollars and make the domain safer.”

The Space Force and NASA in September formally agreed to work together in areas like space policy, research, technology and the protection of the planet from hazardous objects such as asteroids.

Raymond noted that the Space Force facilitates launch services for NASA missions and is interested in cooperating in other areas such as personnel training and in the development of international rules of behavior for outer space.

“Over the past year we have worked hard on training opportunities to capitalize on NASA training courses,” said Raymond. “Some of their training tools developed for space flight will be very valuable to our guardians in the Space Force.”

Space Force troops don’t deploy to space but can still benefit from courses already funded by NASA to learn about the space environment, he added. “They modified a training tool for our purposes and started deploying that to operational centers for our guardians to benefit.”

Raymond said the Space Force has “worked hard with international partners to further the development of norms of behavior.” A NASA-led international effort known as the Artemis Accords has similar goals, he said. “We think there is some leveraging of work they are doing there.”

The Space Force also is interested in joint projects with intelligence agencies especially on the use of small satellites. Raymond said small satellites that traditionally have been used for experiments are now becoming “more operationally relevant” and cheaper, which makes a viable option to replace or supplement the military’s large satellites.

“That’s something we’re thinking through as we speak,” Raymond said. The Space Force is doing studies on small satellite architectures and potential new activities that could be done from space such as tactical surveillance. The service will work with the intelligence community “so we don’t duplicate.”

The Space Force plans to continue to work closely with the commercial space industry to tap privately funded innovation in sectors like launch vehicles and satellites, Raymond said.

As small satellite technology evolves, said Raymond, “are there other missions that should go to space that make sense to do so from a mission and a cost perspective?”

It could be months before the Biden administration rolls out its defense budget proposal for fiscal year 2022 but the expectation is that military spending will not grow at the rate it did during the Trump presidency.

Raymond said he has not discussed budgets with the new leadership but expects the Space Force to have to compete for resources.

“I can’t speculate” on the administration’s budget priorities, he said. “It’s clear that space is important to our national security. We’ve seen an increasing budget for space but we have to compete with everyone else for dollars. If we compete well, we will get the funding that we need, if there’s higher priorities we won’t.”

Raymond acknowledged that spending national treasure on the protection of satellites in space can be a tough sell because the public is not fully aware of the role satellites play in everyday life and as engines of the global economy. Unlike American troops, “satellites don’t have mothers,” he said.