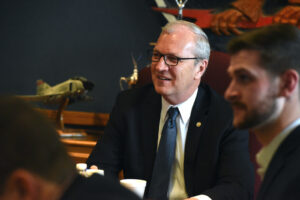 WASHINGTON — A bipartisan group of U.S. senators announced they have formed a Space Force Caucus to help the new military branch advance issues on Capitol Hill.

Cramer said in a statement Sept. 9 that the Space Force needs advocacy on Capitol Hill. “The Space Force requires congressional oversight, authorization and funding to properly develop and carry out its mission,” he said. The caucus will “provide an avenue to craft bipartisan legislative ideas and further support America’s newest military branch.”

Other senators have been invited to join the caucus, Cramer said.

The formation of the caucus was announced Sept. 9 during a video conference with the head of the Space Force Gen. John “Jay” Raymond and Lt. Gen. B. Chance Saltzman, deputy chief of space operations for cyber and nuclear.

Caucus members Cramer, Gardner and Sinema were on the call, as well as Sen. John Hoeven (R-ND) and Sen. John Boozman (R-Ark.).

According to sources, the senators complimented Raymond for providing detailed updates to senators and staff about the standup of the Space Force.

The Space Force Association, a nonprofit advocacy group, said in a statement that the organization since March has led efforts to establish the Senate caucus.

SFA outreach and government liaison Lang Eric Sundby said funding will be “one of the key issues the caucus will face, among many others. I think the caucus is the best opportunity our legislature has in becoming more educated on the realities of national security space.”

Sources who spoke with SpaceNews and asked to not be quoted by name said the caucus will need to grow in size to ensure it has enough influence. One key question is whether the caucus can be sustained if Gardner loses reelection in November. Considered one of the most vulnerable incumbents in 2020, Gardner is an enthusiastic supporter of the Space Force and has been fighting to keep U.S. Space Command in Colorado as the Air Force reviews other basing locations.

These sources said that depending on the outcome of the November presidential and congressional elections, the caucus might have to prepare to push back against Space Force detractors.

“Having a solid bipartisan caucus will reduce the chance of a future administration trying to roll the Space Force back into the Air Force either directly or by starving it of resources,” one Washington source said. “It also makes long term acquisition and space strategy easier across administrations and congresses.”