Gen. John Raymond, chief of the U.S. Space Force, said he has met with members of the Biden transition team but would not speculate on what might change under the new administration.
SpaceNews 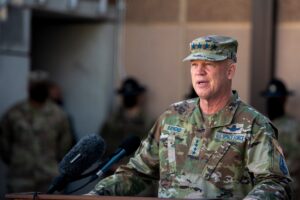 Biden and Vice President-elect Kamala Harris have so far said very little on their views on space policy or on the Space Force, stirring speculation that the space service might not get the same support from the incoming administration that it has gotten from President Donald Trump, who made the Space Force one of his signature initiatives.

During a call with reporters to discuss the first year of the Space Force, Raymond said he would not speculate on what might change or not change under the new administration. “I’m not in the politics business,” he said.

The Space Force, established Dec. 20, 2019, is the nation’s first new military branch since the Air Force was established in 1947.

Raymond said he spoke with members of the Biden transition team over the past week. “I was happy to chat with them,” he said. “But I’m not going to speculate on what they may or may not do. But again, we had a really good conversation.”

The Space Force is now determined to build on what it accomplished during its first year, Raymond said. The plan for 2021 is to continue on with the standup of the headquarters and field commands, grow the ranks by transferring in Air Force space personnel and bring in new recruits.

What is not going to change, said Raymond, is “the focus of our team, and that’s on building a service that delivers national advantage.”

Since the Space Force was established, Raymond and other leaders have sought to make the case that a military service entirely focused on space is good for national security.

The Space Force — which is responsible for operating military satellites, tracking space traffic and protecting U.S. systems from potential threats — heavily depends on technology. Its key challenge in the coming years will be ensuring it has a technically skilled workforce, said Chief Master Sergeant Roger Towberman, the senior enlisted leader of the Space Force.

“Human capital, I believe, is one of the biggest, most critical things we’re going to work on,” said Towberman, who participated in the call with Raymond.

Raymond said the service is working on a “human capital strategy” that will recommend nontraditional approaches to recruiting military personnel and hiring civilians.

Because of the Space Force’s small size — it’s projected to have about 6,400 military members and 10,000 civilians — it has an opportunity to experiment with different ways of managing talent, said Towberman, “in a more personal and individualized way.” By comparison, the Marine Corps has about 180,000 people.

Raymond said the Space Force also wants to make STEM education a trademark initiative. Just like the Marine Corps is known for its Toys for Tots program, the Space Force wants to give back by helping elementary schools teach kids math and science, he said.

The Space Force worked with retired teachers to develop educational videos to be used in classrooms. Space Force officials will be actually teaching elementary school classes about space.