The ability to “characterize threats” is a major challenge for the U.S. Space Force, said Maj. Gen. Leah Lauderback.
SpaceNews 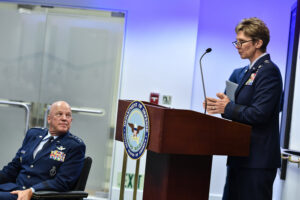 WASHINGTON — China is developing satellites with robotic arms that could be deployed as space weapons. To prepare for the possibility that U.S. satellites might be targeted, the Space Force needs tools to identify whether a satellite is hostile or benign, a senior official said Jan. 6.

“We need something that gives us confirmation and confidence to say: ‘This just happened and this is who did it,’” said Maj. Gen. Leah Lauderback, U.S. Space Force director of intelligence, surveillance and reconnaissance.

“It’s difficult trying to characterize what happens thousands of miles away, all through technical means,” Lauderback said during an online event organized by the Intelligence and National Security Alliance.

The ability to “characterize threats” is a major challenge for the Space Force as it builds new systems and trains operators, she said. “We need some persistence on orbit and sensors so we can make a more confident call in a faster manner.”

Lauderback mentioned satellites with robotic arms as one of several Chinese capabilities the U.S. Space Force worries about. “The concern is that this robotic arm technology could be be used as a grappling arm,” she said. “It’s really hard to attribute from an intelligence standpoint.”

The Space Force has to be able to defend U.S. satellites from jammers, lasers, missiles and other weapons that China and Russia are developing, she said. “Some of these are operational .Others are in testing,” said Lauderback. “This is the future. This is where the adversary wants to go.”

In her previous assignment at U.S. Space Command, Lauderback tracked Russia’s tests of ballistic missiles that are capable of hitting satellites in low-Earth orbit. “Militaries don’t just develop these for deterrence. I think they have an idea they want to use this in the future,” she said. “They understand our dependence on space and they want to be able to deny us.”

China has ground based laser systems of varying power levels that can blind and damage satellites, she said. “We’re characterizing these the best way we can right now but we have a ways to go.”

The Space Force plans to develop intelligence analysts at its future National Space Intelligence Center, to be stood up at Wright Patterson Air Force Base, Ohio. Lauderback said the service also plans to work with allies and commercial companies to figure out how to share information and tap private sector innovation.