Russia on Dec. 15 conducted a ballistic missile test that U.S. Space Command condemned as a threat to satellites in orbit.
SpaceNews 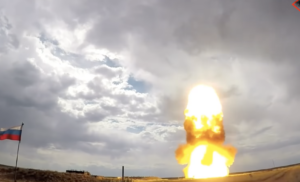 WASHINGTON — Russia on Dec. 15 conducted a ballistic missile test that U.S. Space Command condemned as a threat to satellites in orbit.

“The nation must do something about this,” said Lt. Gen. Nina Armagno, director of staff of the Office of the Chief of Space Operations of the U.S. Space Force.

“Our mission is to protect the interests of the U.S. in space and deter aggression,” said Armagno.

Russia issued a notice to airmen that it would be launching a ballistic missile Dec. 15 presumed to be a Nudol, which can be employed as a defensive interceptor weapon but also can be used to take down satellites in orbits anywhere from 100 miles to 1,200 miles above the Earth’s surface. Many of the satellites currently in low-Earth orbits are commercial and government spacecraft used for intelligence, surveillance, reconnaissance and communications.

“Russia’s persistent testing of these systems demonstrates threats to U.S. and allied space systems are rapidly advancing,” Gen. James Dickinson, commander of U.S. Space Command, said Dec. 16 in a statement. “We stand ready and committed to deter aggression and defend our nation and our allies from hostile acts in space.”

No satellite was reportedly targeted in Russia’s latest test. U.S. Space Command’s assertion that it was an anti-satellite test comes from the assumption that Nudol can be used to target satellites, but these launches also are conducted as missile defense tests, noted Brian Weeden, of the Secure World Foundation. “It’s unlikely that there was an actual target in space,” Weeden said of the latest test.

Weapons like the Nudol are known as “direct ascent” anti-satellite systems and have been tested by Russia multiple times. “If this weapon is tested on an actual satellite or used operationally, it will cause a large debris field that could endanger commercial satellites and irrevocably pollute the space domain,” Dickinson said.

The development and deployment of direct-ascent anti-satellite systems is not prohibited by any arms control agreements, noted Timothy Wright, military analyst at the International Institute for Strategic Studies.