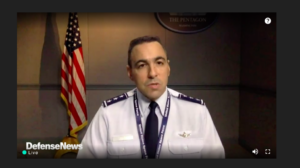 WASHINGTON — In meetings with lawmakers on Capitol Hill, Space Force leaders are making the case that the service plays a central role defending national security and also economic interests.

The Space Force envisions as one of its responsibilities to protect space commerce and “freedom of action” for the United States and its allies, and that point is being stressed to the public and Congress, said Lt. Gen. William Liquori, deputy chief of space operations for strategy, plans, programs, requirements and analysis.

Having free access to the space domain is vital “in order to advance not only our national security but our economic prosperity and scientific knowledge,” Liquori said Sept. 9 at the annual DefenseNews conference.

Liquori is one of the new members of the senior staff of the office of Chief of Space Operations Gen. John “Jay” Raymond.

Raymond has been on Capitol Hill for “multiple engagements with the members, and will continue to engage with Congress,” said Liquori. “We need to be able to have a budget that will allow us to execute those core competencies.”

A key message is the “importance of what it is that the Space Force brings, not only to our joint force but to our entire nation and our allies,” he said.

Liquori was one of the intellectual leaders in the development of the Space Force capstone doctrine titled “Spacepower.” The document makes the case that access and control of space is not just a military concern but a national one due to the role of space in the global economy and the world’s increasing dependence on space for critical products and services.

“Space is simultaneously a source and conduit through which a nation can generate and apply diplomatic, informational, military and economic power,” the Spacepower document says. “The United States must cultivate, develop and advance spacepower in order to ensure national prosperity and security.”

Military space forces, the document says, have a duty to “preserve that prosperity and security.”