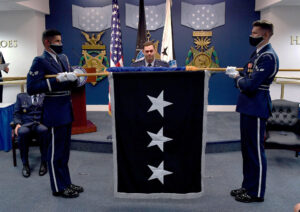 WASHINGTON — The U.S. Space Force plans to make “a lot of announcements” during the month of December as the service approaches its one-year anniversary, Deputy Chief of Space Operations Lt. Gen. B. Chance Saltzman said Oct. 16.

“We’re going to roll out some things that will be kind of new to everyone,” Saltzman said on a live webcast event hosted by the Air Force Association’s Mitchell Institute.

One of the most anticipated announcements is the official name of Space Force members, who are currently still “airmen” because the new service has not yet selected a moniker for space personnel.

Thousands of Air Force space operators who have begun the process of transferring to the Space Force informally call themselves “space professionals.” Having an official name is seen as an important step in building a service culture and attracting recruits, but the process has taken longer than expected.

“We are definitely taking too long on many things that maybe could be done faster,” Saltzman said. “I don’t have an easy answer … we know that almost every decision we’re making is a first of its kind.”

He said leaders worry about rushing to pick a name and then regretting the choice,

“We want to get it right,” said Saltzman. Space Force senior leaders don’t want their successors to “undo a lot of the things and the decisions that we made in haste,” he said. “So we’re really just trying to be deliberate and I know that’s frustrating.”

The chief of the Space Force Gen. John Raymond has said he wants to soon announce a name but he also wants to lay out long term plans for the future of the service.

“We really want to look forward at what’s next, what can we expect next year, and in the third year,” said Saltzman. “General Raymond is laying out a plan now for his remaining time as the chief of space operations. The first birthday is going to be a big deal.”

Another pending decision are the ranks and insignia for officers and enlisted personnel. A rollout was expected this summer but had to be put on hold after the House passed an amendment to the 2021 National Defense Authorization Act to make Space Force use naval ranks. The Space Force now has to wait for that issue to be resolved in a House-Senate NDAA conference later in the year.

Saltzman touched on other topics during the Mitchell Institute event.

Although bringing in the other services would bolster the Space Force with with additional resources, the Space Force would support the other services having their own space capabilities, said Saltzman. The Army, Navy and Marine Corps operate fleets of aircraft separately from the Air Force so space should be no different, he said. “It’s a very nuanced discussion and it’s happening at the highest levels.”

The Space Force supports replacing large satellites with proliferated low Earth orbit constellations. The service is coming around to the idea of proliferated LEO systems, Saltzman said. “Wwe’re recognizing that these enormous satellites that do everything for everybody also make for really good targets. And so that might not be the best approach from a redundancy, from a resiliency standpoint.”

“As we start to disaggregate those requirements and go to smaller satellites and distribute that architecture over far more systems, it creates a targeting problem for the adversary,” he said.

The Space Force plans to be a bigger customer of commercial satcom. “I think there is so much that can be gained by taking advantage of what the commercial sector offers us in terms of satellite communications,” said Saltzman. Rather than focusing on building satellites, the Space Force can concentrate on “how we protect our data,” he said. Step one is to “leverage more of the commercial sector in terms of the bandwidth, and then put our resources against the best way to protect the data that moves through that network.”