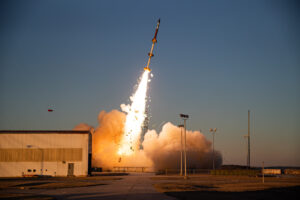 This was the first sounding rocket launch by California-based Space Vector Corp., one of two companies selected by the Air Force in 2018 for the Sounding Rocket Program-4. Space Vector and Northrop Grumman received a combined $424 million multiple-award contract to launch sounding rockets over seven years.

Pink clouds were visible in the region after 60 pounds of a powdered material was heated to high temperature by a fuel mixture and ejected from the rocket in gaseous form, Peterson said in a statement to SpaceNews. He noted that this was done at an altitude of more than 100 miles, and the mixture naturally dissipated causing no harm to the environment.

Sounding rockets are small test vehicles that carry scientific payloads that are put into space for short periods of time, usually for a few minutes.

Peterson said the ionosphere can be measured by bouncing radio waves off it using “sounders.” The amount of time it takes for the echo to come back at each frequency can be used to determine the density of the ionosphere.

“While the fundamental processes forming the ionosphere are generally known, it is a very complex system and there are many details yet to be understood,” said Peterson. The ionosphere, like the surface of the ocean or a lake, has many waves and ripples propagating across it, which create changes in time and space, he explained. “The better we understand these processes, the better we can understand how they affect systems.”

The vehicle was built by Space Vector and Kratos Space and Missile Defense. The Sounding Rocket Program-4 program is managed by the Space Force’s Space and Missile Systems Center small launch and targets division at Kirtland Air Force Base.

The Space Vector launch was the Space Force’s first small launch mission of 2021 and the first under the Sounding Rocket Program-4 contract.