The U.S. Space Force on Oct. 21 is standing up its first field command at Peterson Air Force Base, Colorado.
SpaceNews 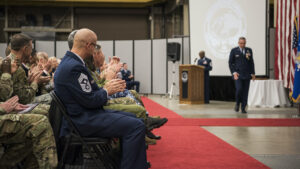 WASHINGTON — The U.S. Space Force on Oct. 21 is standing up its first field command at Peterson Air Force Base, Colorado.

The Space Operations Command, or SpOC, will be led by Lt. Gen. Stephen Whiting. He will officially assume command in a ceremony Wednesday.

The SpOC will be responsible for organizing, training and equipping space forces assigned to combatant commands that conduct military operations around the world.

An existing SpOC at Vandenberg Air Force Base, California, will be re-designated as SpOC West and will continue to conduct operations in support of combatant commanders, said Space Force spokesperson Lynn Kirby.

“Space Operations Command is the field command responsible for organizing, training and equipping forces to conduct space operations, and SpOC West is responsible for executing those missions,” Kirby said.

The Colorado-based SpOC is one of three major field commands under the U.S. Space Force.

A Space Systems Command will be stood up sometime in 2021 to oversee the development and acquisition of technologies. The third field organization will be the Space Training and Readiness Command — to be based at Peterson Air Force Base — responsible to educate and train space professionals.