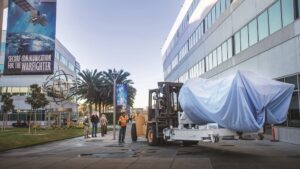 The Space Force announced in June that it would stand up a Space Systems Command to oversee the development and acquisition of next-generation technologies.

Gen. David Thompson, vice chief of space operations of the U.S. Space Force, said the new command will be established sometime in 2021 but could not provide a more specific timeline. He said the Space Force is in no hurry because it needs time to figure out how to put this new command together.

“We anticipate standing it up in 2021,” Thompson said on a virtual event hosted by DefenseOne.

There are still many details to be worked out, he said, such as negotiating with the Army and the Navy on what space programs will transition to the Space Force and the Space Systems Command.

One of the more complicated moves will be the realignment of the Pentagon’s Space Development Agency. Air Force Secretary Barbara Barrett had pushed for the transfer of SDA to the Space Force before the congressionally set deadline of October 2022. But Thomson said the move of the SDA would not be rushed.

With Space Systems Command, “we are moving quickly but not as quickly as we have with the other commands,” he said. It’s important for the Space Force to better understand how the SDA, the Space Rapid Capabilities Office, the Navy and the Army do business and figure out how they will work together with existing organizations like the Space and Missile Systems Center.

Thompson said competition among agencies helps “come up with new approaches, new operating concepts, new ideas … And that’s a lot of what we’re expecting and planning out of the Space Development Agency, to be able to bring in disruptive technologies and ideas and operating contest concepts in a constructive way.”

Working with the private sector

Thompson said he is aware of the economic fallout from the coronavirus pandemic on the commercial space sector and wants the Space Force to be a better customer to the industry.

“What we need to work on is understanding how to be able to communicate to that sector what our needs are, what our requirements are, what’s expected of us,” said Thompson.

The Space and Missile Systems Center’s satellite communications procurement office, for example, is changing how it procures satcom services so it can buy from emerging low-Earth orbit broadband providers, said Thompson. “We are in the process right now of trying to finalize agreements that allow us to purchase data relay communications and other services from commercial providers in low Earth orbit.”

The satcom industry needs visibility into the government’s demand, he said. “What we ought to be able to do is send a signal to the commercial market sector that year in, year out, over x number of years, you can expect the Department of Defense and the Space Force will buy a certain amount of services.”

Same logic applies to small launch services, said Thompson. Small satellite launch providers have been among the most financially impacted by the retrenchment of venture capital during the pandemic.

Small launch vendors need some assurance that the government will be buying services, he said. “We ought to be able to send consistent signals to those commercial sectors as to what they can count on in terms of partnership and revenue stream.”