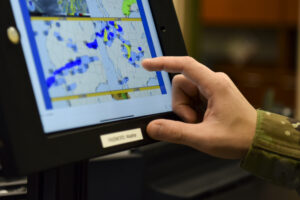 The Space Force is looking to create a “21st century talent management and human capital strategy” to bring more technology experts into the service so the question now is how to make that happen, Thompson said Aug. 20 in remarks to the National Defense Industrial Association’s virtual Space Warfighting Industry Forum.

The Space Force wants to reach out beyond the “traditional sorts of persons and personalities who you find in military services,” Thompson said.

“There is an opportunity to step out a little bit, look for a new and different sort of person, and look for them in different places,” he said.

Thompson did not specify how the Space Force intends to attract skilled tech workers who would typically not want to serve in the military or may not qualify. A team in Colorado Springs is working on proposed personnel reforms, he said. Some options being considered are to offer short-term assignments that would allow people to more easily transition between the military and the civilian sector.

Former Air Force space operator John Galer, now assistant vice president of the Aerospace Industries Association, said the Space Force has an opportunity to introduce innovative personnel policies because it is building a service from a “clean sheet.”

It’s not about “lowering the standards” for military service but taking a broader look at the talent pool, Galer said Aug. 19 at the Ascend virtual conference hosted by the American Institute of Aeronautics and Astronautics.

Stringent requirements disqualify about 70% of the U.S. population from joining the military, said Galer.

“Not all of the requirements can be removed, but I think over time as we’ve seen the military evolve, it’s thrived because it’s challenged the status quo,” he said.

The Space Force needs a workforce with diverse backgrounds and skills, and that need might outweigh the institutional norms, Galer said. “You have to decide what do you need a space operator, an intelligence officer enlisted member to do? And then base your entry requirements on that.”

The service also has to consider what motivates young people. “This is a new generation workforce, and we have a pretty fairly archaic personnel management system,” said Galer. Some aspects of military service that turns many people off are the rigid career paths and the impact on families.