Brig. Gen. Cothern: What type of launch vehicles will be needed “depends on the threats.”
SpaceNews 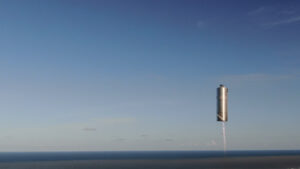 “We are super excited about the future of space launch,” Cothern, the vice commander of the Space and Missile Systems Center, said Sept. 8 during a virtual forum hosted by the RAND Corp.

Cothern however would not speculate on whether the Space Force might one day have a need for the super heavy reusable launchers like SpaceX’s Starship or Blue Origin’s New Glenn.

“We believe the current providers address the plans we have today for the near future,” Cothern said in response to a viewer’s question on the potential military value of super heavy-lift vehicles like Starship and New Glenn that are being developed to fly to the moon and beyond.

SMC is focused on ensuring “100 percent mission success” and is looking forward to working with ULA and SpaceX in Phase 2 of the National Security Space Launch program, said Cothern. As to what might be required in the next generation of launch vehicles, “as the lead acquirers for military space, it’s a question that’s dear to us,” he said.

The RAND forum included a panel discussion centered around the company’s space launch market study. The study’s recommendations have stirred a continuing debate about the role of the U.S. military in shaping the future of the launch industry.

Bonnie Triezenberg, a RAND senior engineer and lead author of the study, argued that the Air Force made the right decision selecting two providers for the Phase 2 launch procurement, but should also consider supporting additional companies to bolster the U.S. industrial base.

Cothern said the Space Force has no plans to financially support launch providers outside of the two winners of Phase 2. If Northrop Grumman and Blue Origin want to have their new vehicles certified for national security launch, they will have to fund the cost, he said. “We’ll continue to work with any of the non-selected Phase 2 launch service providers that choose to continue with the launch vehicle certification efforts at their expense.”