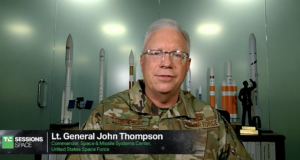 “The way DoD traditionally does business has really been daunting to startups and new entrants,” Thompson told Matt Burns, managing editor of TechCrunch, during a virtual conference hosted by the tech news website.

Burns pointed out that space billionaire Elon Musk during a fireside chat in February told Thompson that United States is not moving fast enough in space innovations and other countries are catching up.

“Do you agree?” Burns asked Thompson.

Thompson did not challenge Musk’s assertion but insisted that the Space Force is taking steps to turn that around.

He said there are several efforts under way “to try to simplify our interaction” with startups and small businesses.

A relatively easy way to get a company’s foot in the door is to join the Space Enterprise Consortium, said Thompson.

The Space and Missile Systems Center created the consortium, known as SpEC, in 2017 to help attract commercial companies from the space industry to bid on military projects.

“It is inexpensive to join,” Thompson said.

The consortium has grown to 441 members, 355 of which are non-traditional such as startups, small businesses and academic institutions. To date the SpEC program has awarded 80 prototype projects valued at $856 million. It plans to award up to $12 billion worth of projects over the coming decade.

SpEC moves contracts faster than traditional programs. It awards contracts for prototypes and those companies selected to build prototypes have the inside track if the Space Force decides to buy it in quantities.

“This is proof that we’re prioritizing prototyping and innovation,” said Thompson.

He also suggested companies should bid for Small Business Innovation Research awards, many of which focus on space technologies. And they should sign up to showcase their products at special “Pitch Day” events where they can win contracts on the spot.

The Space and Missile Systems Center is in the process of standing up a technology accelerator called SpaceWERX, said Thompson. “We hope to inject more startups and small businesses into our ecosystem.”