Upgrades will include mix of new phased array antennas, commercial services and capacity from other U.S. government agencies.
SpaceNews 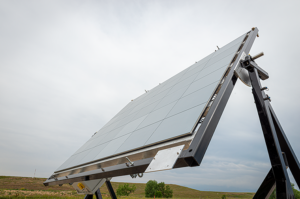 WASHINGTON – In a test this summer at Schriever Air Force Base, Colorado, an electronically steered phased array antenna made by Lockheed Martin and Ball Aerospace communicated with four military satellites across multiple orbits.

This was a demonstration of a technology the U.S. Space Force might use in the future to replace the aging network of parabolic dish antennas located around the globe used to fly military satellites.

The Multi-Band Multi-Mission program is one of several that Turnbull oversees as the director of the Cross Mission Ground and Communications Enterprise at the Space and Missile Systems Center.

“We were able to do four simultaneous contacts across multiple orbital regimes at different frequencies,” he said.

The Lockheed Martin/Ball Aerospace antenna, about the size of a large conference table, is one of two systems being evaluated under the Multi-Band Multi-Mission program. The other is a phased array antenna from L3Harris that will be tested in the coming days, Turnbull said. The companies received contracts from the Defense Innovation Unit in April 2019 to develop antenna prototypes.

The Space Force operates about 77 satellites but more will be deployed in the coming years so the current network of antennas doesn’t have enough capacity. “Phased array technology to control multiple satellites across multiple orbits is something we’ll need in the future,” said Turnbull. “We’re launching a lot of new capabilities and they all need to be commanded and controlled from the ground.”

The Space Force, however, has not yet decided what type of electronically steered antennas it will buy for the satellite control network. “We still have a lot of work to do in assessing what’s affordable,” said Turnbull.

The likely solution, he said, will be a mix of new phased array antennas, commercial services and sharing agreements to use antenna capacity from other U.S. government agencies.

“We’re doing a study on what we want to go build,” said Turnbull. “The most cost effective would be a huge antenna that can talk to 30 to 40 satellites at once, but that also becomes a single point of failure.”

Under a program called “commercial augmentation services,” Turnbull’s office is looking at options such as leasing capacity from commercial vendors. It also is working on a partnership with the National Oceanic and Atmospheric Administration to use the agency’s antennas that have excess capacity.

“To fly the missions that we’ll be launching, we’ll need civil, commercial systems, something like Multi-Band Multi-Mission in addition to the existing systems we have today,” Turnbull said.