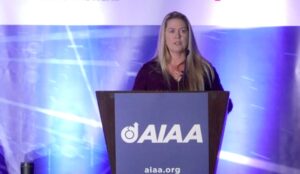 Speaking on a webinar organized by the nonprofit NewSpace New Mexico, Vaughn said continuing the space council would be a “low hanging fruit” recommendation to the new administration.

The council was first created in 1989 during the George H.W. Bush administration, disbanded in 1993 and reestablished in July 2017 by the Trump administration.

“The space council has had, I think, demonstrable success in showing good pace of change, and being able to move new policy recommendations through the interagency process,” said Vaughn.

Other experts also have called on Biden to retain the National Space Council.

“What I would say to the administration is ‘please keep the space council intact because I think that’s a critical element in making sure that we have all of those interagency elements at the table together at the highest possible level,’” she said.

Vaughn endorsed the findings of a December report written by a group of government and industry officials that called on a national “whole of government” effort to advance space technology and innovation as an engine of economic growth.

The health of the industry, said Vaughn, has “national security implications.” The different sectors of the space industry are interconnected so policies have to take a holistic view, said Vaughn.

Launch providers like VOX Space depend on the government to invest in infrastructure and generate demand. “The launch vehicle element is super exciting but … it’s just one part of a much, much larger deeper ecosystem,” Vaughn said.

The new space race now is really an economic race with elements of national security, she said. “The economic and financial changes need to happen at the same pace and rate of change as the technology changes.”